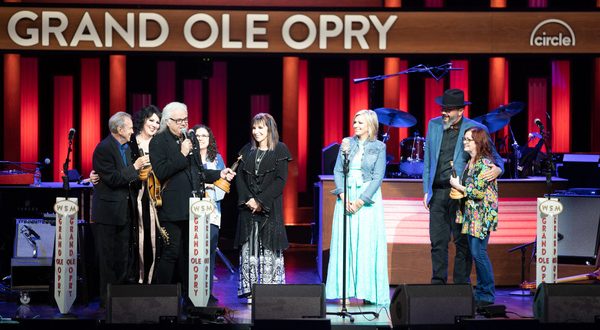 The multi-Grammy-nominated Dove Award-winning The Isaacs, (Becky, Ben, Lily and Sonya) members of the Gospel Music Hall of Fame, were officially inducted into the Grand Ole Opry family last night by Opry members Ricky Skaggs and The Whites: Buck, Sharon, and Cheryl. Skaggs had surprised the family group with an invitation to join the Opry last month.

“When we think of all the people there are in the whole world, we feel we must be the most loved by God because this is such a wonderful night,” said Sonya. “We’ve already felt like family in our hearts and tonight it becomes an official wedding.” Mother Lily expressed, “What more could we ever ask for than to become a part of this family” and later Ben shared his gratitude for parents who brought them up in music. “The Isaacs are so much better at giving than receiving so this night is so humbling,” said Becky.

The family closed their set with a beautiful rendition of “It Is Well With My Soul” and were joined at the end of the show in an all-cast performance of the Opry classic “Will The Circle Be Unbroken.”
“The Isaacs have brought so many great performances and so much joy to the Opry over the course of the 25 years they’ve been visiting us,” said Dan Rogers, Opry vice president and executive producer. “Whether they are sitting in the auditorium, standing on stage, or watching from the wings, every single person here tonight is thrilled they’ve come home to the Opry to stay.”

The Mayor of the Isaacs’ hometown of Hendersonville, TN, Jamie Clary, issued an official proclamation declaring Tuesday, September 14 “The Isaacs Day,” and a couple of the group’s friends shared in the excitement in having The Isaacs join the Opry. “A great institution welcomes a great family,” said Opry Member Vince Gill. “They couldn’t be more perfect for the Grand Ole Opry and I’m lucky they are my friends.” “The Isaacs have the voices of Angels. The sounds of harmonies they produce are modern and ancient at the same time. They are masters of the craft. Ben Isaacs is producing my forthcoming Gospel album and I’ve gotten to know him as a respected producer, musician, artist and now, I’m honored to call him and his family, friends. Congratulations,” Dennis Quaid shared.

Music editor for Nashville.com. Jerry Holthouse is a content writer, songwriter and a graphic designer. He owns and runs Holthouse Creative, a full service creative agency. He is an avid outdoorsman and a lover of everything music. You can contact him at JerryHolthouse@Nashville.com
Previous Billy Strings Will Wrap Up 2021 Tour Here In Nashville
Next LISTEN: Jackson+Sellers Debut Their New Song “Hush”