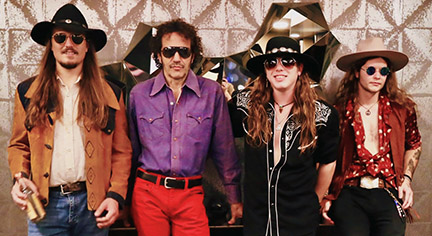 You might have seen up and coming Southern/soul rockers Hippies & Cowboys playing in any number of Nashville’s hot spots like Kid Rocks, Johnny Cash’s, or the Tin Roof but if you haven’t seen them, you need to. Nashville.com is proud to premiere their debut single “20 To Life.” (Listen above) They recorded “20 To Life” at East Avalon Records in Muscle Shoals, Alabama. “I wanted to write a song that was a cool bluesy outlaw rock n’ roll tune. What is more perfect for that than a man’s woman running out on him and leaving him so pissed that he wants to kill her?” says Aaron Sparling (lead singer & guitarist.)

The rest of band members consist of  Andrew Lambie (Lead Guitar), Scott Metko (Drums), Kevin Corbo (Bass), and Nolan Brown (Piano & Guitar). Drummer Scott Metko tours with David Ball. He is also an on-screen drummer for Patsy Cline and ABC’s ‘Nashville’ Rayna Jaymes. The high-energy band has traveled throughout the country, playing shows from Florida to Detroit to everywhere in between. Their musical influences and taste vary from member to member, but the one thing they all have in common is their love for soul music, such as Sam and Dave, The Blues Brothers, Booker T, The MGs, Otis Redding, and much more. They also all have a strong bond over classic rock, such as Aerosmith, Zeppelin, The Doors, CCR, Tom Petty, Lynyrd Skynyrd, The Beatles, and so many more.

You can also check the band out HERE.

Music editor for Nashville.com. Jerry Holthouse is a content writer, songwriter and a graphic designer. He owns and runs Holthouse Creative, a full service creative agency. He is an avid outdoorsman and a lover of everything music. You can contact him at JerryHolthouse@Nashville.com
Previous New Willie Nelson Music Just In Time For His 89th Birthday
Next Thomas Rhett Releases “Us Someday”