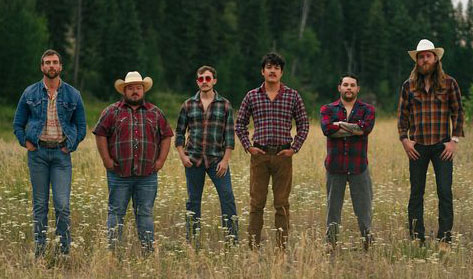 Flatland Cavalry’s new song, “Mountain Song,” is debuting today, listen above. Reflecting on the song, lead singer Cleto Cordero shares: “‘Mountain Song’ was written in June of 2017 with one of my buddies, Stephen Constancio. We were headed for the Pacific Northwest and the first leg of the tour found us in the quaint and quiet mountain town of Red River, NM. I remember feeling enamored and safe; nestled by the towering topography that surrounded us on all sides. Born and raised in West Texas, all I’ve ever known is dry, dusty flatland. After ‘trying’ to write a song about things that we weren’t feeling, I made a suggestion, saying something along the lines of: ‘Hey, this is stupid. We are trying to write about something that we aren’t even inspired by. Let’s write a song about this place right here.’ Looking out the cabin window at the moonlit mountain in the distance the first lines came to mind and we just ‘chased the rabbit down the hole’ as they say.

It is one of my favorite recordings we have ever made because it is so honest and authentic; quite frankly when listening to it a part of me can’t believe we captured what we did in such little time and with such little preparation. The warmness and intimacy of the recordings captured at Bruce Robinson’s studio, coupled with the humble and peaceful message of the song make it such a beautiful and fun recording to listen to. I hope that listeners are lifted to a peaceful serene place in their minds each time they listen to ‘Mountain Song.’”

“Mountain Song” is the latest release from the band following their 2021 album, Welcome to Countryland, as well as this past spring’s Far Out West Sessions, which features stripped-down versions of seven songs from the record. Produced by Jake Gear and recorded at Nashville’s Sound Emporium Studios.

Known for their electric live shows, the band will perform throughout this year with upcoming stops at Baton Rouge’s Texas Club, Memphis’s Graceland Live, Stephenville’s Twisted J Live, Tucson’s Tucson Arena, Grizzly Rose in Denver, Tulsa’s Cain’s Ballroom among many others. The band will also perform at the Texas State Fair, Troubadour Festival, and Born and Raised Festival this fall. See below for complete itinerary.

Since forming in 2012, Flatland Cavalry has released three studio albums: Welcome to Countryland (2021), Homeland Insecurity (2019) and their 2016 debut, Humble Folks, which reached #2 on iTunes’ Country Albums chart, #17 on Billboard’s Americana/Folk Albums chart and #28 on Billboard’s Top Country Albums chart. Additionally, of Homeland Insecurity, Rolling Stone declared, “Flatland Cavalry mix Red Dirt roots-rock with fiddle-driven twang. The blend is particularly intoxicating,” while the Dallas Observer praised, “a breath of fresh air for a Texas country music scene hungry for young blood.” Flatland Cavalry has continued to tour relentlessly throughout their career, building a passionate grassroots fanbase as they went. In addition to numerous sold-out headline shows, the band has joined artists such as Luke Combs, Turnpike Troubadours, Randy Rogers Band, Midland and Parker McCollum on the road.

Music editor for Nashville.com. Jerry Holthouse is a content writer, songwriter and a graphic designer. He owns and runs Holthouse Creative, a full service creative agency. He is an avid outdoorsman and a lover of everything music. You can contact him at JerryHolthouse@Nashville.com
Previous Kendell Marvel Announces “Don’t Tell Me How To Drink” Tour
Next Jim Lauderdale Releases His 35th Record, Game Changer