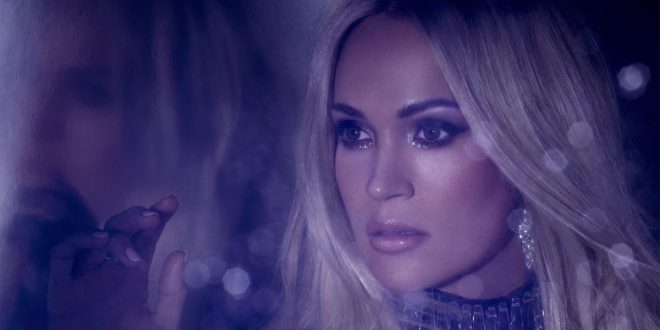 After teasing fans with a series of mysterious posts beginning the night before her birthday this past week, Carrie Underwood’s new single, “Ghost Story,” is available today. Watch and listen to the lyric video above.

Written by Josh Kear, Hillary Lindsey and David Garcia and co-produced by David Garcia and Underwood, the superstar describes “Ghost Story” as “a different take on a revenge song, which is something I love to sing about. Instead of smashing headlights, this scorned lover is letting her ex know that she will continue to haunt him no matter how hard he tries to forget her.”

“Ghost Story” is the latest collaboration between Underwood and Garcia, having co-produced her 2018 release, Cry Pretty, which marked the first time Underwood produced her own album. Garcia and Underwood also co-produced Underwood’s 2021 album of gospel hymns, My Savior. Underwood and Lindsey have collaborated on a string of hits such as “Jesus, Take the Wheel,” “So Small,” “Last Name,” “Smoke Break,” “Church Bells,” and the title track, “Cry Pretty.” Kear co-wrote Underwood’s signature hits, “Before He Cheats” and “Blown Away,” and co-wrote another cinematic classic, “Two Black Cadillacs” with Underwood and Lindsey.

“‘Ghost Story’ is a dramatic song that David, Hillary and Josh wrote for me,” says Underwood. “They are such talented, amazing songwriters who know me so well, and from the first time I heard it I knew I had to record it. I have always loved performing songs that tell a story and inspire some kind of cinematic imagery when you hear them, and that is definitely true of ‘Ghost Story.’ It creates a mood and a vibe that is different than anything else I’ve recorded before.”

Underwood’s new single comes on the heels of winning her 16th ACM Award on March 7 – for Single of the Year with Jason Aldean for their smash hit duet, “If I Didn’t Love You.” The multi-week #1 “If I Didn’t Love You” has spent a record-setting 26 weeks in the Top 10 of Billboard Country Airplay so far, with more than 264 million global streams RTD.

Underwood is nominated for two 2022 GRAMMY® Awards – for Bluegrass/Country/Roots Album of the Year for My Savior, and she and Aldean are nominated for Best Country Duo/Group Performance for “If I Didn’t Love You.” The duo was also nominated this week for two 2022 CMT Music Awards for “If I Didn’t Love You” – Collaborative Video of the Year and Video of the Year, which Underwood won in 2021 for “Hallelujah,” with John Legend. She continues to reign as the most awarded artist in CMT history with 23 total wins.

Music editor for Nashville.com. Jerry Holthouse is a content writer, songwriter and a graphic designer. He owns and runs Holthouse Creative, a full service creative agency. He is an avid outdoorsman and a lover of everything music. You can contact him at JerryHolthouse@Nashville.com
Previous Americana Honors & Awards To Air On Circle Network
Next Morgan Wallen Grateful For 3 Sold Out Bridgestone Shows