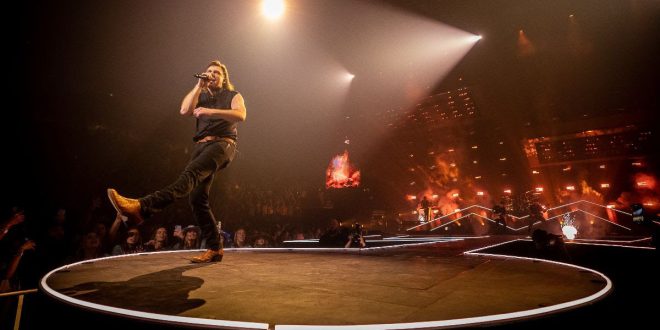 Morgan Wallen performed the last of his three consecutive sold-out nights at Bridgestone Arena, part of his 58-show Dangerous Tour. “Run This Town” (Rihanna, Jay-Z, Ye) blared from the speakers before Wallen took the stage, like a walk up song he might have chosen during his baseball career, foreshadowing the night to come.

“Man, this is an incredible thing,” Wallen celebrated ahead of ACM Album of the Year title track “Dangerous.” “It’s my home state – the town that I call home now – a town that’s been good to me. I’ve got the majority of my family here tonight.”

The at-capacity crowd followed Wallen’s every move and sang word-for-word a smooth sequence of album cuts that followed, from “Silverado For Sale” to “Somebody’s Problem” and the ultimate ode to his Hancock County roots, “865.”

Just after performing “Where I Find God” with tourmate Larry Fleet, Wallen welcomed surprise guest Thomas Rhett to the stage for the Rhett-penned Dangerous track, “Whiskey’d My Way.” Then, without missing a beat, the Sneedville, Tennessean gleamingly revealed, “I’ve got another good buddy of mine out here tonight – I bet you’re gonna like this one,” as former tourmate Jason Aldean surprised the crowd with his 2005 breakout hit “Hicktown.”

At the top of the encore, Chicago-born rapstar Lil Durk, Wallen’s recent collaborator, thrilled with an appearance as the pair worked the stage throughout their No. 1 debut Hot R&B/Hip-Hop Songs Chart crossover “Broadway Girls.”

As Wallen closed the night he thanked the crowd sincerely, “God bless you, Nashville – these have been three of the best nights of my life.”

Music editor for Nashville.com. Jerry Holthouse is a content writer, songwriter and a graphic designer. He owns and runs Holthouse Creative, a full service creative agency. He is an avid outdoorsman and a lover of everything music. You can contact him at JerryHolthouse@Nashville.com
Previous LISTEN: Carrie Underwood’s “Ghost Story”
Next Alan Isakov Coming To The Ryman For 2 Shows