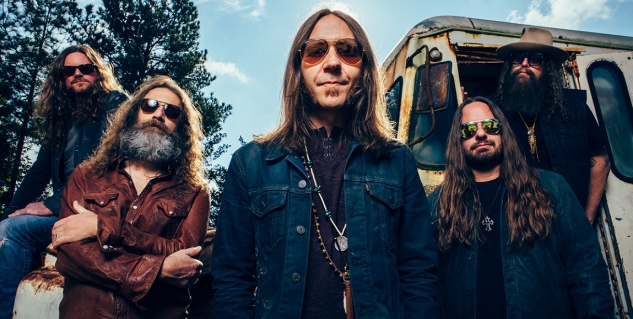 The band will also premiere a new performance video for the song during their first ever “Blackberry Smoke Pandemic Crib Jam” live stream tonight at 5:00pm ET on Facebook. The live stream will also feature a performance from the band and a fan Q&A.

“Take The Highway” is the latest song unveiled from Blackberry Smoke’s special new EP, Live From Capricorn Sound Studios, which will be released June 19 with a portion of all proceeds going to the Recording Academy’s MusiCares COVID-19 Relief Fund. Recorded earlier this year at Capricorn Sound Studios in Macon, GA, the project consists of six new versions of songs that have special ties to the historic studio and town and will be released as a lead up to the band’s anticipated “Spirit of the South Tour: A Celebration of Southern Rock and Roll Music” this summer. Produced by Blackberry Smoke, the EP is now available for both CD and vinyl pre-order.

Ahead of the release, the band’s new version of “Midnight Rider,” originally recorded by The Allman Brothers Band, premiered last month at Relix in celebration of two special anniversaries: the formation of The Allman Brothers Band on March 26, 1969 and the release of “Midnight Rider” on the same day in 1971. The track has a special connection to Capricorn Sound Studios as Gregg Allman broke into the studio to record the song’s original demo. Blackberry Smoke lead singer Charlie Starr also plays Duane Allman’s iconic Goldtop Les Paul guitar in the band’s new version. Watch the live performance video HERE.

The new project marks a significant moment in Capricorn Sound Studios’ history as it was the first time a major band has done a professional recording at the studio in over 40 years. Additional songs featured on the EP are renditions of The Allman Brothers Band’s “Revival,” Little Richard’s “Southern Child” and Wet Willie’s “Keep On Smiling” and “Grits Ain’t Groceries,” both featuring special guest vocals from Jimmy Hall—a member of Wet Willie during Capricorn’s peak years, who returned to the studio to record these tracks. The EP also features background vocals from The Black Bettys.

In conjunction with this new project, the band will embark on their extensive “Spirit of the South Tour: A Celebration of Southern Rock and Roll Music” this summer, which will feature special guests The Allman Betts Band, The Wild Feathers and founding member of The Allman Brothers Band, Jaimoe. Created in celebration of the various roots and influences within Southern music, every show will conclude with a unique collaborative finale, which will feature Blackberry Smoke, The Allman Betts Band, The Wild Feathers, Jaimoe and additional surprise guests showcasing the inspirations of Rock, Blues, Gospel and Soul music.

Additionally, for the first time ever, Blackberry Smoke is partnering with The Allman Brothers Band Museum At The Big House—located in Macon, GA—to bring the band’s storied history on the road with a new mobile set up. The museum will feature never-before-seen archival items including original hand-written lyrics, awards, rare family photographs, iconic pieces of clothing and jewelry, one-of-a-kind instruments played by the band and more. Jaimoe will also be onsite at the museum and available for meet and greet opportunities at each stop. All “Spirit Of The South Tour” ticket holders will be granted free access to the museum with $1 of each ticket donated to The Allman Brothers Museum at the Big House to help preserve its history and heritage. See below for complete tour itinerary. All currently scheduled dates are subject to change.

The “Spirit of the South Tour” adds to a landmark series of years for Blackberry Smoke, who recently returned to the studio with Grammy Award-winning producer Dave Cobb to begin work on their next album, including a new song with Jamey Johnson. The new music follows the release of their latest full-length album, Find A Light, which debuted as the best-selling Country and Americana/Folk album in the country, entered at #3 on the Billboard Top Country Albums chart and #2 on the Billboard Americana/Folk Albums chart in 2018.

Music editor for Nashville.com. Jerry Holthouse is a content writer, songwriter and a graphic designer. He owns and runs Holthouse Creative, a full service creative agency. He is an avid outdoorsman and a lover of everything music. You can contact him at JerryHolthouse@Nashville.com
Previous WATCH: Jesse Malin’s Animated Video and Duet With Lucinda Williams
Next Q&A With Caroline Jones