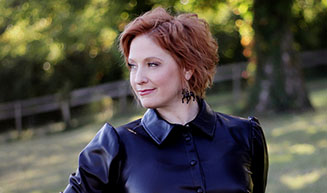 Leigh Nash of Sixpence None the Richer, the pop/country songwriter, and mom, whose unmistakable voice tops global chartoppers “Kiss Me” and “There She Goes,” launches a new YouTube Series titled “Becoming…” today. The series, slated for bi-weekly release on her YouTube channel, focuses on her experiences and journey as a mother, and includes conversations with fellow moms/musicians Suzy Bogguss and Liz Longley.

“I started thinking about all the incredible friends I have and our shared stories, which led me to think, ‘How fun would it be to do an online episodic with these beautiful people, casually sharing topics so many can relate to?’ The first six episodes will center on motherhood and feature the wonderful Suzy Bogguss and Liz Longley — we’re three women in music, all at varied stages of the motherhood journey, navigating similar yet different situations,” shares Nash. “We’ll expand on topics but these first episodes set a tone of vulnerability, humor, and common ground. I think women around the world will be able to see themselves in our experiences which ultimately (I hope, anyway!) will make viewers feel connected and make the world a bit smaller of a place.”

Says Bogguss, “It’s such a casual vibe, just right for catching up with friends! And… the viewer gets the fly on the wall perspective.”

Longley adds, “Her voice has been part of our lives for years, but to hear the inner workings of her creative mind and to get a sense of the heart behind her music is such a joy. I was honored to sit down with Leigh and talk about music, motherhood and so much more.”

Simultaneously, Nash, via Visionary Media Group, began releasing tracks from The Tide Acoustic Sessions (acoustic versions of songs from her most recent album The Tide, Vol.1) on Sept. 23 with “Made For This,” and will continue bi-weekly releases culminating on Dec. 2 with all six acoustic tracks packaged together. “This record was so important to me. I wanted to revisit those songs in a different, more intimate way and share them with my fans.”

Music editor for Nashville.com. Jerry Holthouse is a content writer, songwriter and a graphic designer. He owns and runs Holthouse Creative, a full service creative agency. He is an avid outdoorsman and a lover of everything music. You can contact him at JerryHolthouse@Nashville.com
Previous Ashley McBryde Set For Two Nights At The Ryman
Next Mitchell Tenpenny Event Raises 50K To Fight Cancer