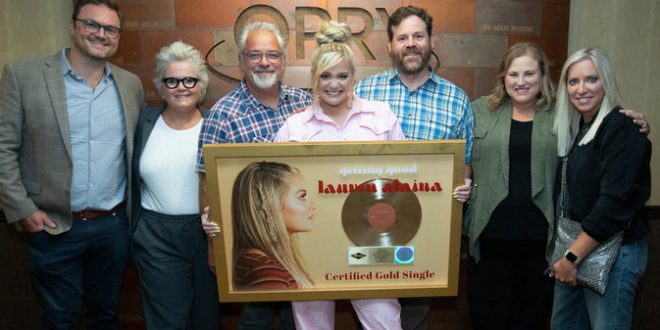 Lauren Alaina was surprised backstage last night before her performance on the Grand Ole Opry with a plaque celebrating her song “Getting Good” being certified GOLD® by the RIAA. “Getting Good,” written by Emily Weisband, is included on her Getting Good EP. Alaina also realized a childhood dream with getting to record a special mix of “Getting Good” with her friend/mentor, superstar Trisha Yearwood.

“This achievement as a female in Country music is such an honor,” said Alaina. “Thank you to my fans for listening and buying the music I pour my heart into. These Gold records are just as much yours as they are mine.”

Additionally, Alaina received the news tonight that her singles “Like My Mother Does” from her debut album Wildflower as well as “Doin’ Fine” and the title track “Road Less Travelled” from her career-changing sophomore album Road Less Travelled were also certified GOLD® by the RIAA.

In more Lauren Alaina news, the Georgia native will star in an upcoming episode of CBS Television’s Secret Celebrity Renovation. She will join Florida Georgia Line’s I Love My Country Tour in September and will star in a Hallmark Channel movie “Roadhouse Romance” premiering on September 11. On November 2, her book, “Getting Good At Being You” will be released. The book is available for presale wherever books are sold.

In 2020, Alaina had just wrapped her SOLD OUT headlining That Girl Was Me Tour and was on tour with Blake Shelton when all touring had to stop because of COVID-19. Despite the halt in touring, Alaina refocused and found herself working harder than ever to work and stay connected with her fans which helped her with a blessed career-defining 2020 which included scoring her 3rd career No. 1 (in less than 4 years) with her HARDY and Devin Dawson collaboration “One Beer,” a performance with Kane Brown to perform their 6X Platinum hit “What Ifs” at the halftime show of the traditional Thanksgiving Day Dallas Cowboys football game; her duet “What Do You Think Of?” from her Getting Good EP featuring international pop sensation Lukas Graham shot up the iTunes chart hitting No. 1 on iTunes country and No. 4 on the all-genre chart. The video for “What Do You Think Of?”, directed by TK McKamy, marked the largest-scale Virtual Production (VP) shoot for a music video in the world at the time. Alaina continued to make herself available to be part of several charitable events/fundraisers including Grand Ole Opry’s popular 12th annual Opry Goes Pink to help raise awareness for breast cancer research, performing in the 93rd Annual Nashville Christmas Parade benefiting the Monroe Carell Jr. Children’s Hospital at Vanderbilt and she performed and hosted Musician on Call’s(MOC) “I’m On Call for Tennessee” virtual concert that was made available to healthcare facilities statewide for patients and staff to enjoy throughout the month of December through MOC’s Virtual Bedside Performance Program.

Music editor for Nashville.com. Jerry Holthouse is a content writer, songwriter and a graphic designer. He owns and runs Holthouse Creative, a full service creative agency. He is an avid outdoorsman and a lover of everything music. You can contact him at JerryHolthouse@Nashville.com
Previous Americana Announces First Of 240 Performers
Next WATCH: Gavin Lee’s American Crazy