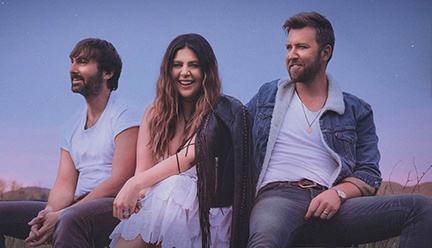 Lady A Stays On Top Of The Charts With “Champagne Night”

Lady A tops the Mediabase/Country Aircheck Singles chart for the third consecutive week and hold the No. One spot on Billboard’s Country Airplay chart for the second week as “Champagne Night” becomes their 11th career chart-topping hit. It’s the first song from NBC’s primetime series Songland to become a radio single. “Champagne Night” can now be found on the recent expansion of Lady A’s No. One album, the OCEAN DELUXE EDITION available here.

“Since we started the journey with ‘Champagne Night’ every step of the process has been so special to us,” Hillary Scott said. “We couldn’t be more thankful for all the support from our fans and friends at Country radio and to Songland for believing in the song as much as we did. I can’t believe we get to start 2021 off with a multi-week No. One….it almost feels unreal!”

After serving as the guest artist for the season two premiere of Songland, they chose the winning song, “Champagne Night,” penned by the show’s mentor Shane McAnally, alongside aspiring songwriter Madeline Merlo and the trio. As the laidback pick-me-up was crafted specifically for Lady A it serves as a lighthearted ode to a simplified, humble interpretation of the high-life and immediately jumped to the No. One spot on iTunes’ all genre chart. Additionally Dave Haywood, Charles Kelley and Hillary Scott delivered virtual renditions of the No. One hit on The Tonight Show Starring Jimmy Fallon, The Voice, the Today show, CMT Music Awards and during the Rose Bowl Parade.

Music editor for Nashville.com. Jerry Holthouse is a content writer, songwriter and a graphic designer. He owns and runs Holthouse Creative, a full service creative agency. He is an avid outdoorsman and a lover of everything music. You can contact him at JerryHolthouse@Nashville.com
Previous Morgan Wallen Drops “Dangerous: The Double Album”
Next WATCH: Canaan Smith’s “Cabin In The Woods”