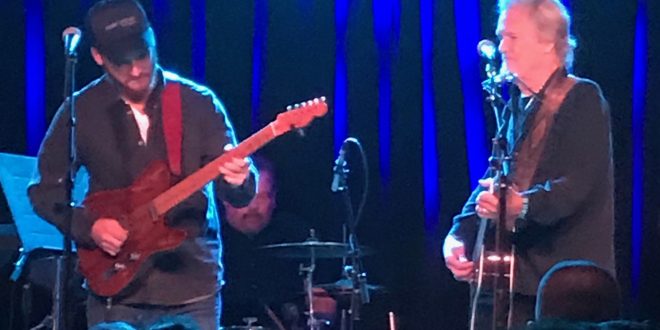 Kristofferson (right) performing at the Basement East in Nashville back in 2018. Photo by Brad Lykken

Kris Kristofferson played to a standing-room only crowd last night at the Basement East, the first of two sold out shows,  alongside Ben Haggard and the Strangers (Merle’s band). The long line wrapped around the building on a hot and steamy Monday. There were fans from every generation and the soon to be 82-year-old Kristofferson did not disappoint, playing all of his biggest hits including “Sunday Morning Coming Down” and “Me & Bobby McGee. The talented band included drummer Jeff Ingraham, bassist Doug Colosio, fiddler Scott Joss, steel player Normal Hamlet and acoustic guitar player Noel Haggard. Ben Haggard, and amazing singer in his own right, sang many of his dad’s classic songs like “Okie from Muskogee,” “Mama Tried,” and “Just Stay Here And Drink.” Hit songwriter Anthony Smith, who wrote the song “Kristofferson” for Tim McGraw, could be seen in the audience singing the words to every song. Margo Price made a surprise appearance along with Casey Kristofferson to close the show with the classic “Why Me.”
–Jerry Holthouse

Music editor for Nashville.com. Jerry Holthouse is a content writer, songwriter and a graphic designer. He owns and runs Holthouse Creative, a full service creative agency. He is an avid outdoorsman and a lover of everything music. You can contact him at JerryHolthouse@Nashville.com
Previous Collin Raye Celebrates 25 Years With Greatest Hits Album
Next Tommy Townsend To Release Solo Effort Produced By Shooter Jennings