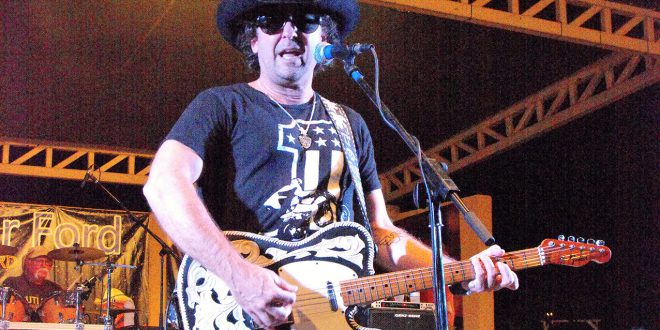 Singer/songwriter Tommy Townsend has a long history with the Jennings family, Waylon and Jerry “Jigger” Bridges, produced music on Townsend over the span of several years that was released as an album in 2003. Keeping it all in the family, Tommy turned to longtime friend Shooter Jennings to produce his new album, Turn Back The Clock, which hits July 6, 2018 on the Black Country Rock label.
“Releasing this new music has been a goal and dream of mine for many years, and I have to thank Shooter for the encouragement, direction and passion to help make Turn Back The Clock a reality,” said Townsend. “Waylon will always be my musical hero, and I couldn’t think of anyone more perfect to be at the helm of this album than Shooter.”
The new album features two original Townsend tunes, “Plug The Jukebox Back In” and “Longest Day Of Summer,” alongside tunes by the likes of Steve Young, Holly Williams, Brandi Carlile, Gordon Lightfoot, and Waylon Jennings. The album was recorded and mixed at Station House Studio in Los Angeles and CarnBarn Studio in Franklin, TN.
A native of Blairsville, in the mountains of Northeast Georgia, Tommy first met Waylon as a teenager when Jennings performed at the local fair. Jennings became a mentor to Townsend and recorded music on the aspiring singer/songwriter on several occasions.
In 2008, following a stint has half of the country music duo Townsend O’Donnell, he joined the Waymore’s Outlaws as the lead singer. The reformed and renamed Waylors included Richie Albright on drums, Jerry “Jigger” Bridges on bass and Fred Newell on steel guitar. The band toured the world singing Waylon classics and new material in the Waylon vein. From 2014-2017, the band opened for Shooter Jennings and then backed his set.

Music editor for Nashville.com. Jerry Holthouse is a content writer, songwriter and a graphic designer. He owns and runs Holthouse Creative, a full service creative agency. He is an avid outdoorsman and a lover of everything music. You can contact him at JerryHolthouse@Nashville.com
Previous Kris Kristofferson And Ben Haggard Slay Basement East Crowd
Next Americana Music Association Announces Award Nominees