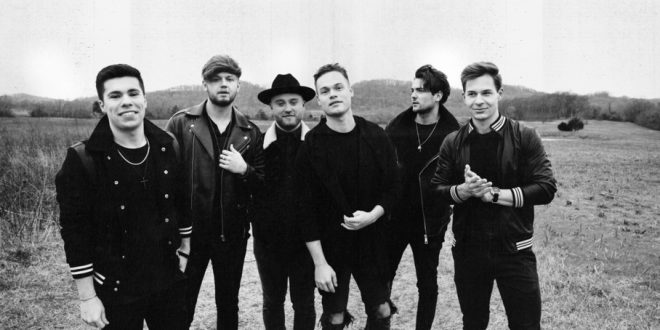 King Calaway officially launched their “Nashville House Band Series” today. At the core of King Calaway’s music is the mission to bring people together to create something bigger than the sum of our parts. In that spirit the bandmates decided to offer up themselves up as Nashville’s band to support and play with fellow artists practicing social distancing.
The series sees its official debut with King Calaway serving as Nashville’s house band with an uplifting and inspired version of John Mayer’s “Waiting On the World to Change.” The song takes on new meaning as they are joined by chart-topping Stoney Creek labelmates Jimmie Allen and Lindsay Ell, as well as BBR Music Group labelmate and chart-topping TrailerTrap creator Blanco Brown whose international smash “The Git Up” catapulted him to worldwide success.
Upcoming episodes of their “Nashville House Band Series” will include country superstar Sara Evans, renowned violinist and dancer Lindsey Stirling, as well as the best-selling UK country act in history The Shires.
While today marks the official series launch, the six members have been sharing covers and collaborations across social media in the past weeks as they quickly grow a reputation as Nashville’s ‘House Band’ despite the fact that they have been quarantined separately in different countries (Gibraltar, Scotland, United States) and across multiple states.
“Growing up in Nashville, I have always looked up to how unique our music community is. People like Vince Gill play on other artists’ records just for love of playing,” noted King Calaway drummer Chris Deaton. “We posted a video of us playing and singing Ob-La-Di, Ob-La-Da to our socials. I got a message from Jimmie Allen right after asking how we make those videos. And I replied saying ‘let’s make one together!’ From there the wheels started turning. So many musicians are physically separated from their bands and fellow musicians right now, and if we can make music with them that is what Nashville is all about to us.”
Last week King Calaway and labelmate Jimmie Allen lifted spirits when they virtually collaborated on the lighthearted classic, “Hooked on a Feeling.”
From virtual band practices, to conquering social media takeovers and livestream (even with global time differences), King Calaway is finding a way to keep each other connected in new ways. They delivered ready-made joy with their take on The Beatles’ “Ob-La-Di, Ob-La-Da.”  The band’s song “World For Two” has taken on a different significance in these times, as has their cover of “Love The One You’re With” from their debut album Rivers that they posted as a Gratitune this weekend
“Growing up playing in many different bands, I have always been drawn to great musicians. There’s something magical about playing in a band with amazing musicians that can’t be replicated, and I feel we have that in King Calaway,” said guitarist Caleb Miller. “Players like Brad Paisley and Keith Urban have always been icons of mine and have always put themselves out there to bring Nashville together, I hope in some small way with the House Band Series we can offer ourselves in the spirit of great players like that!”
Today the musicians of King Calaway accompanied some of Nashville’s most gifted fellow artists with an all-star crew made up of Blanco Brown, who demonstrated his vocal range, as well as Jimmie Allen who donates a soulful verse. The track is topped off by the tasteful guitar licks and vocals of Lindsay Ell who as an artist understands the depth of John Mayer’s “Waiting On the World to Change” better than most, having previously rerecorded and released his entire Continuum album.
Not only was the collaboration brilliantly pieced together and performed, but it also showcases the power of “banding” together during this time to unite musicians and fans with the spirit of the Nashville music community in these hard times.
During this quarantine, King Calaway has been worlds apart…literally. Something that makes the band so uniquely significant is that they’re multi-instrumental and multi-national hailing from Gibraltar, Scotland and the United States. While having the humbling experience to be a part of this year’s C2C lineup, they were in London when the festival was cancelled. The band went their separate ways to spend pre-planned family time when the travel ban was enforced, leaving Simon in Gibraltar and Jordan in Scotland. Divided between three different countries and multiple states, the members have found innovative ways to ensure that the Nashville will play on.

Music editor for Nashville.com. Jerry Holthouse is a content writer, songwriter and a graphic designer. He owns and runs Holthouse Creative, a full service creative agency. He is an avid outdoorsman and a lover of everything music. You can contact him at JerryHolthouse@Nashville.com
Previous Adam Doleac Releases Greatest Hits Album With New Track
Next Gabby Barrett Tops The Charts