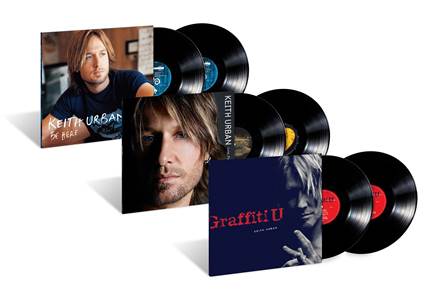 Keith Urban’s career has seen the release of nine consecutive platinum albums, 23 #1 songs and six #1 albums, including his latest Graffiti U. His wide-ranging musical skill set has made him one of the industry’s most enduring artists. Now, three of Urban’s best-loved albums—Be Here, Love, Pain & the Whole Crazy Thing and his latest Graffiti U—are available now on vinyl for the first time ever via Capitol Nashville/UMe. These three hit-filled albums are pressed on standard weight black vinyl and have all been expanded to 2LPs to present the music in the highest quality. They join the already-available Urban LPs Fuse, Get Closer and Golden Road, all of which were first released on vinyl in 2016, thus making Urban’s entire album catalog now available to vinyl listeners. Order all three now!

Urban’s ninth studio album, Graffiti U, which has emerged as one of 2018’s Top 10 best-selling albums in any genre, debuted at #1 onBillboard‘s Country Album Charts. The 15-song collection finds the artist revisiting some of his earliest musical influences while exploring some new creative avenues. The album includes the hits “Female,” “Parallel Line” and its latest song “Coming Home,” featuring American singer-songwriter Julia Michaels, which borrows an iconic guitar riff from Merle Haggard’s classic “Mama Tried.”

The double platinum smash Love, Pain & the Whole Crazy Thing, originally released in November 2006, features the #1 hit “Once in a Lifetime,” which set a record for what was then the highest debuting single in the six-decade history of Billboard‘s Hot Country Songs chart, along with three more Top Five hits: “I Told You So,” “Everybody,” and Urban’s second Grammy-winning song “Stupid Boy.”

Be Here, Urban’s third American album, was originally released in 2004, and achieved platinum sales four times over, spawning no less than three Number #1 singles, “Days Go By,” “Better Life” and the Rodney Crowell-penned “Making Memories of Us.”

Music editor for Nashville.com. Jerry Holthouse is a content writer, songwriter and a graphic designer. He owns and runs Holthouse Creative, a full service creative agency. He is an avid outdoorsman and a lover of everything music. You can contact him at JerryHolthouse@Nashville.com
Previous Copperline Music Signs Ciera Mackenzie
Next Brett Young Sells Out His First Ryman Show