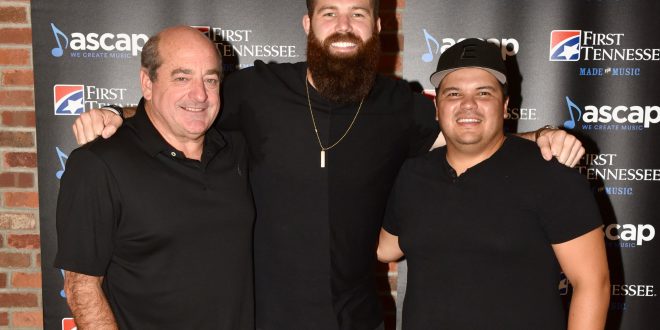 Music Row friends and family gathered yesterday (July 30) to celebrate MCA Nashville recording artist Jordan Davis’s debut single and first #1 song, “Singles You Up,” co-written by Steven Dale Jones and Justin Ebach, and produced by hit songwriter Paul DiGiovanni to become his first #1 as a producer.  The party, hosted by ASCAP and held at Nashville hot spot Fat Bottom Brewery, held a shoulder-to-shoulder crowd who cheered Davis as Universal Music Group Nashville Chairman and CEO Mike Dungan announced the track was recently certified Platinum by the RIAA.  To celebrate, Davis has released a special acoustic version of “Singles You Up” (listen HERE) .
Presentations and speeches celebrating the songwriters were made by publishers Curb/Word’s Janine Appleton Ebachand Ole’s Ben Strain, and MusicRow’s Sherod Robertson, Country Aircheck’s Chuck Aly, and Country Radio Broadcasters’ Brooke Sanders were also on hand to celebrate the group.
Davis released his debut album, Home State , in March, which features 12 tracks all co-written by the artist, including his current Top 40 single, “Take It From Me.” Billboard recently premiered the music video for “Take It From Me,” which can be viewed HERE. Fans can catch the songwriter-artist on the road as part of Jake Owen’s ongoing “Life’s Whatcha Make It Tour.”

Music editor for Nashville.com. Jerry Holthouse is a content writer, songwriter and a graphic designer. He owns and runs Holthouse Creative, a full service creative agency. He is an avid outdoorsman and a lover of everything music. You can contact him at JerryHolthouse@Nashville.com
Previous Nu-Blu’s New Single Seeks To Unite Instead Of Divide
Next Kenny Chesney’s “Songs for the Saints” Outpacing Projections