Having broken his own record at Chicago’s Soldiers Field with 52,189 and a completely sold out show, Kenny Chesney finally released Songs for the Saints Friday, July 27. Like the capacity crowd at the storied Midwestern football stadium, the response to the deeply personal album has been immediate and enduring.

“Songs for the Saints is important for so many reasons,” says the songwriter/superstar. “It celebrates the spirit of the people of the Virgin Islands, the way they’ve faced – and continue to face – the aftermath of Hurricanes Irma and Maria with such heart and hope. It also lets them know they’re not forgotten… We see them, what they’re doing and we’re going to stand with them.

“I think all of us face challenges, and these songs are meant to get you through whatever those things are. But Songs for the Saints is also a project where not only do you get 11 songs to get you through your struggles, you get Ziggy Marley, Jimmy Buffett and Mindy Smith standing with us – and all the money from this record goes straight to the Love for Love City Fund, which is devoted to island recovery and restoration.”

“Songs for the Saints is well outpacing our projections,” says Warner Bros. Nashville’s SVP Global Revenue & Touring Ben Kline. “We are already over our first week number at Apple, and that’s just the weekend, that’s before‘Good Morning America’ and ‘The Tonight Show,’ and even more media. But even better, with 70,000 album streaming equivalents already, the word of mouth keeps building.”

With “Get Along,” the song about being united over what we share instead of divided, spending two weeks at No. 1, Chesney broke Billboard’s Country Airplay Chart record for most career chart-toppers. A song that captured the emotional zeitgeist of the moment, Chesney and his band will perform it on NBC’s “The Tonight Show Starring Jimmy Fallon” tomorrow, July 31.

What began as a few songs written in the throes of Hurricane Irma and the wake of Hurricane Maria, Songs for the Saints quickly turned into an actual project. A deeply personal and absolutely in the moment song cycle, it takes listeners to the places that save them, considers the things that really matter – and makes a difference. 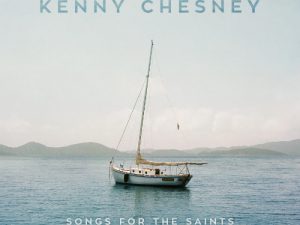 Music editor for Nashville.com. Jerry Holthouse is a content writer, songwriter and a graphic designer. He owns and runs Holthouse Creative, a full service creative agency. He is an avid outdoorsman and a lover of everything music. You can contact him at JerryHolthouse@Nashville.com
Previous Jordan Davis’s Celebrates Debut Single And First #1 Song
Next Bobby Bare Announces New Podcast