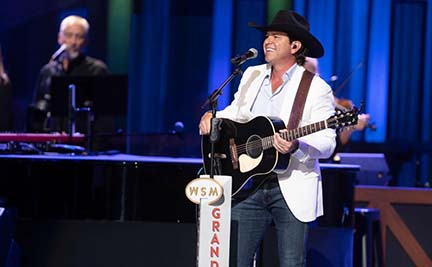 Jon Wolfe had a long-time dream come true Friday night, when he made his debut appearance on the Grand Ole Opry. He performed “A Cowgirl Like You” from his Dos Corazones album and “Singin’ Thing” from his Natural Man album in front of a packed house that included family and friends from Texas and Oklahoma.

From small town Oklahoma to the bustling city of commodities trading floor to the dance halls and honky-tonks of Texas to Music Row, Jon Wolfe has been known for his traditional voice and unique storytelling abilities. He has racked up an impressive 200 million streams from Dos Corazones, Natural Man, Any Night In Texas, It All Happened in a Honky Tonk albums, his Feels Like Country Music EP and two live albums.

Wolfe heads back to Texas this week for the revival of his Honky Tonk Tequila Fest at Floore’s Country Store in Helotes on Friday.

Music editor for Nashville.com. Jerry Holthouse is a content writer, songwriter and a graphic designer. He owns and runs Holthouse Creative, a full service creative agency. He is an avid outdoorsman and a lover of everything music. You can contact him at JerryHolthouse@Nashville.com
Previous Kimberly Williams-Paisley To Host Alzheimer’s Benefit
Next Christmas 4 Kids Announces 40th Anniversary Concert