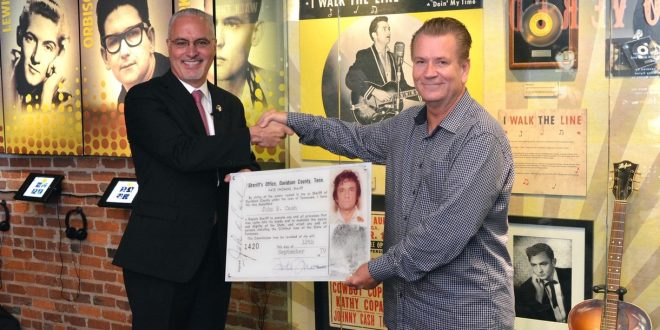 “We know that the most impactful, influential legend in this country as it relates to the criminal justice system is Johnny Cash,” says Sheriff Daron Hall. “Johnny Cash’s interest in criminal justice is well documented, including the Folsom or San Quentin visits that were highly publicized. What most people don’t know is that what he was saying was more important than what he was singing. He believed passionately in prison reform and criminal justice reform. You can imagine how excited we were when one of our photographers was stirring around in a box and found a photo of something that we want to present to Bill (Miller) and make sure it stays where it belongs in the museum. I would like to unveil what is his actual commission card. He was commissioned as a law enforcement deputy, in 1979. The irony is that it was September 12, exactly 24 years from the date when he would pass away. The actual card was given to Johnny Cash so he could go throughout the county to enforce the laws.” 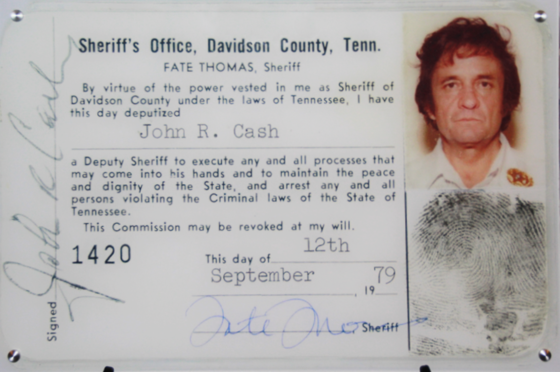 “Let’s hear it for the sheriff and for law enforcement!” said Johnny Cash Museum Founder Bill Miller. “It’s an honor to have you here sir and we want to recognize you. Johnny respected the law and Johnny was one of the first performers and entertainers to go and sit with the President, then President Nixon, to talk about prison reform. Johnny Cash’s first prison show was in San Quentin and there was prisoner sitting in the front row that night who, until the day he died, credited Cash for that moment in time when he knew that there could be a different life out there. That man was Merle Haggard. Thank you for sharing this with us Sheriff.”

Johnny Cash’s Davidson County Deputy Sheriff Commission Card states the following: “By virtue of the power vested in me as Sheriff of Davidson County under the laws of Tennessee, I have this day deputized John R. Cash a Deputy Sheriff to execute any and all processes that may come into his hands and to maintain the peace and dignity of the State, and arrest any and all persons violating the Criminal laws of the State of Tennessee.” The artifact will become part of the collection at the Johnny Cash Museum.

1979 would prove to be a banner year for the Man-In-Black. He would record and release one of his many signature tunes “(Ghost) Riders in the Sky” and would attend a luncheon hosted by President Jimmy Carter at the White House. In addition, he would perform for the President on NBC’s “Country Stars of the 70s” at the Ford Theatre in Washington, D.C. In Music City, he would serve as the Grand Marshal of the Nashville Veterans Day Parade joined by his wife June Carter Cash and his father World War I veteran Ray Cash. In addition, October 18 was declared “Johnny Cash Day” in Tennessee to honor the day that Johnny Cash received a Humanitarian Award from the United Nations for his work with children.

Music editor for Nashville.com. Jerry Holthouse is a content writer, songwriter and a graphic designer. He owns and runs Holthouse Creative, a full service creative agency. He is an avid outdoorsman and a lover of everything music. You can contact him at JerryHolthouse@Nashville.com
Previous Watch: Cole Swindell, “No One Rocks Mine”
Next Austin Jenckes Announces Benefit Concert For Mental Health