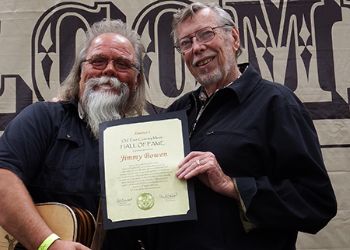 “The 44th Annual Old Time Country Music Festival in Fremont, Nebraska was such an amazing event! Thanks to the NYCMA, Bob and Sheila Everhart, and especially the National Traditional Country Music Association for keeping the traditional sounds of country music going strong,” stated Jimmy Bowen. “It is such an honor to be included alongside so many of our industry’s greatest artists from the Carter Family, Loretta Lynn, Jeannie Seely, Gail Davies, Jeannie C. Riley, Roy Rogers & Dale Evans, Grandpa and Ramona Jones to Roy Acuff.”

Jimmy Bowen has been creating music for more than three decades and, thankfully, has even bigger plans for the future. His new single, “Blood Red Moon,” was co-written written by Sonny LeMaire, Liz Hengber and Tommy Lee James.

Music editor for Nashville.com. Jerry Holthouse is a content writer, songwriter and a graphic designer. He owns and runs Holthouse Creative, a full service creative agency. He is an avid outdoorsman and a lover of everything music. You can contact him at JerryHolthouse@Nashville.com
Previous Kane Brown’s Longtime Drummer Killed In Crash
Next President And Mrs. Jimmy Carter Visit Grand Ole Opry