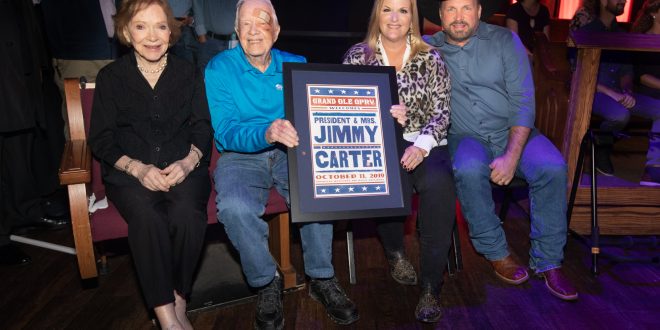 President and Mrs. Jimmy Carter visited the Grand Ole Opry last Saturday while in Nashville for a weeklong build marking the 36th year of their Habitat for Humanity Jimmy & Rosalynn Carter Work Project. In a surprise moment, Opry members Garth Brooks and Trisha Yearwood introduced them on stage. Brooks and Yearwood have served as Habitat ambassadors for more than a decade and worked alongside the Carters at the build site.
President Carter had previously visited the Opry House as Governor of Georgia and again during his presidential term. President Richard Nixon was the first U.S. President to visit the Opry when he attended the opening night of the Grand Ole Opry House in 1974. President Nixon, who sang and played piano at the Opry that night, is the only President to have performed on the Opry stage.
Opry favorites provided the lunchtime entertainment at the Habitat build site as they performed behind the Opry mic stand for more than 300 volunteers each day Monday – Friday. More than 20 houses were built in North Nashville as part of the project.

Music editor for Nashville.com. Jerry Holthouse is a content writer, songwriter and a graphic designer. He owns and runs Holthouse Creative, a full service creative agency. He is an avid outdoorsman and a lover of everything music. You can contact him at JerryHolthouse@Nashville.com
Previous Jimmy Bowen Inducted Into The Old Time Country Music Hall of Fame
Next Songwriting Legends Inducted Into Nashville Songwriters Hall of Fame