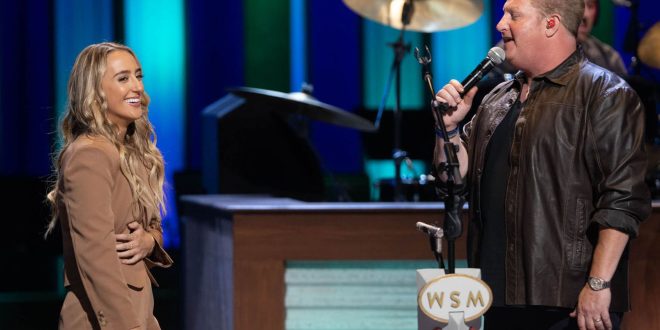 Rising country artist Ashley Cooke celebrates a week of milestone firsts. Last night, Cooke stepped into the historic circle for her Grand Ole Opry debut. Cooke’s performance at the famed institution saw the emerging artist showcasing her sound in performances of her newly charting single at country radio, “Never Til Now” feat. Brett Young. After receiving a roaring standing ovation, the milestone moment turned full circle when Cooke was invited by Rascal Flatts’ lead singer, Gary LeVox, to join in on a duet of “What Hurts The Most.”

“Making my Opry debut was one of the most surreal moments I’ve ever experienced. I got into country music because I fell in love with and found comfort in the storytelling of Rascal Flatts,” shared Cooke. “Having Gary LeVox invite me into the circle and ask me to sing one of the songs that got me into music in the first place was completely full circle. I’m so thankful to have stood where every country great has before me and I couldn’t be more excited to be a part of the tradition.”

The bucket list Opry debut comes the week before she takes center stage at the Ryman Auditorium, making yet another debut on Nov. 2 and again on Nov. 3 as she continues as direct support Cole Swindell’s 19-stop Back Down To The Bar Tour.

Cooke’s big year saw the songstress making her national television debut on ABC’s “The Bachelorette,” kick-starting the upward trajectory of “Never Til Now” at terrestrial radio.

Music editor for Nashville.com. Jerry Holthouse is a content writer, songwriter and a graphic designer. He owns and runs Holthouse Creative, a full service creative agency. He is an avid outdoorsman and a lover of everything music. You can contact him at JerryHolthouse@Nashville.com
Previous Alan Jackson To Receive CMA Lifetime Achievement Award
Next Jerry Lee Lewis Dead At 87