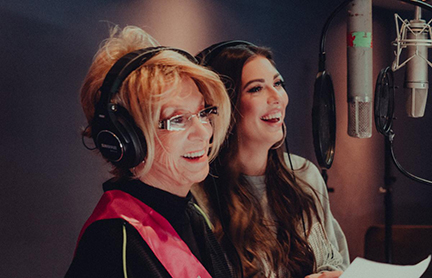 Jenny Tolman Releases Deluxe Version Of “There Goes the Neighborhood”

On Friday, April 9, country music fans will be reintroduced to Jennyville, the outrageous fictional town at the heart of country newcomer Jenny Tolman’s debut album, when the deluxe version of There Goes the Neighborhood is released on all platforms with three bonus tracks.

Jennyville is a make-believe burg full of gossipy women who are lovable and neurotic, catty and competitive. There Goes the Neighborhood was initially released in July 2019 and debuted at #25 on the Billboard Country Album Sales chart. Tolman began touring extensively—including a performance in front of her largest crowd ever as the opening act for Brantley Gilbert in Marion, IL—building increasing momentum for 2020…then everything came to a screeching halt with the onset of the Covid-19 pandemic.

“As 2020 went on,” Tolman says, “instead of continuing to wallow in self-pity, I decided we had to keep moving forward. Selfishly, I wasn’t ready to give up on this album—I knew there were so many people who hadn’t even heard of it—so Dave [Brainard, her producer and now fiancé] and I came up with this idea to add three new songs to the original 13-track album and promote it as a deluxe version.

The first of these, “Still Gonna Die,” an up-tempo cover of a song written by the incomparable Shel Silverstein and initially performed by the country supergroup Old Dogs (Waylon Jennings, Mel Tillis, Bobby Bare, Jerry Reed) in 1988. Tolman remembers hearing the song on Willie’s Roadhouse, a Sirius XM Radio channel that specializes in playing traditional country music, and started closing every show with it as a grateful nod to those who paved the way in the comedic music genre.

Similarly, “Who’ll Be Your Fool” (Tolman/Brainard/Bill Whyte) features another veteran country singer, Opry legend Jeannie Seely, in a wistful ballad written from the perspective of a woman contemplating who her lover’s next woman will be: “Darlin, it’s time for the next one in line; tell me who’ll be your fool when I’m gone.”

Rounding out the trio of new music is “Tabitha,” one of the first songs Tolman ever completed (at age 18 in 2014) and the one that helped build her fan base on social media, though she had never recorded it other than as a live performance.

“Growing up,” Tolman notes, “my dad was always singing show tunes around the house and at the piano, so I think that really instilled a love of characters and the concept of entertainment from music at a young age.”

Tolman recently added a new vignette to her own life story when her longtime boyfriend and music partner, Grammy-nominated producer Dave Brainard, dropped to one knee and asked her to marry him. Fittingly, the pair got engaged by Jenny Lake at the base of the Grand Tetons in Jackson Hole, Wyoming.

And she is anxious to perform again—Tolman’s first hometown show in over a year will be in-person and live-streamed from The Local in Nashville on Wednesday, April 7 at 6:00 p.m. CT. Summer dates include the iconic Million Dollar Bar at The Cowboy in Jackson Hole, WY on Friday, May 28 and the Country Thunder festivals in Iowa (June 12), Wisconsin (July 15) and Florida (Sept. 21).

Music editor for Nashville.com. Jerry Holthouse is a content writer, songwriter and a graphic designer. He owns and runs Holthouse Creative, a full service creative agency. He is an avid outdoorsman and a lover of everything music. You can contact him at JerryHolthouse@Nashville.com
Previous Brian Kelley Signs Record Deal For Solo Project
Next WATCH: Gavin Lee’s “Friend With A Beer”