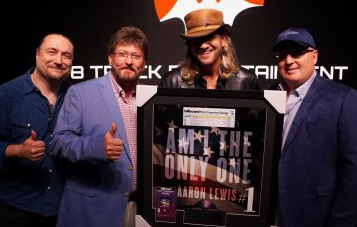 Ira Dean, Jeffrey Steele & Aaron Lewis Celebrate “Am I the Only One”

Last week in Nashville, Ira Dean (formerly of country music group Trick Pony) and his publishing company, 8 Track Entertainment, gathered with friends and industry colleagues to celebrate the mainstream success of “Am I the Only One,” Aaron Lewis’ new hit song. Dean, a co-writer on the track (along with Lewis and Jeffrey Steele), was presented with a commemorative plaque from Valory Music (Lewis’ label).

“It’s amazing how this song has just taken off and has struck a chord with people,” explains Dean, who also co-produced the song with Lewis. “I think whatever side of the fence you’re on, we all have watched TV over the last year and a half and thought ‘what the hell is going on?’ I couldn’t be more proud to be on this song. I’ve never written a song and had people, from both sides, walk up to me and thank me for writing it.”

“Ira is one of the most talented, most musically gifted writers and producers in Nashville,” adds 8 Track Entertainment President Noah Gordon. “He’s truly at the top of his game. I believe we’re going to see many more great things from Ira. I’m lucky to be his publisher and proud to be in his corner!”

“Am I the Only One” is available streaming and download here.

Music editor for Nashville.com. Jerry Holthouse is a content writer, songwriter and a graphic designer. He owns and runs Holthouse Creative, a full service creative agency. He is an avid outdoorsman and a lover of everything music. You can contact him at JerryHolthouse@Nashville.com
Previous Pilgrimage Music & Cultural Festival States COVID-19 Policy
Next Grand Ole Opry Prepares For 5,000th Saturday Night Broadcast