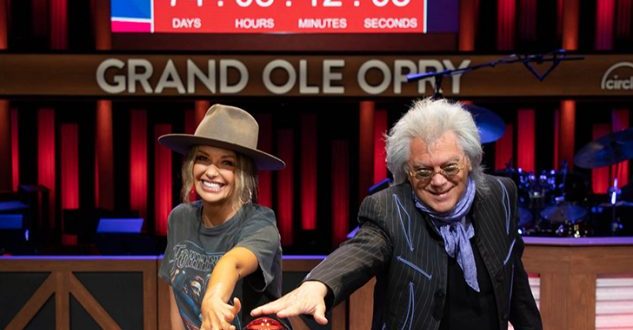 The Grand Ole Opry announced it will mark its historic 5,000th Saturday night broadcast on October 30, 2021, with a month of celebrations, a limited-time exhibit, and a star-studded night of performances on the iconic Opry stage. Opry members Marty Stuart and Carly Pearce appeared at a press conference at the Grand Ole Opry House in Nashville, Tennessee, to officially kick off the countdown to 5,000 and share their perspectives on the significance of the milestone. Buy TICKETS Here!

“Country music is no stranger to hard times, and neither is the Grand Ole Opry,” said Marty Stuart from the Opry stage in March 2020, the second Saturday night broadcast with no live audience. “For 95 years it has seen world wars, catastrophes, and presidential assassinations, but somehow the show has gone right along. It’s an honor to stand on this stage as we get ready to celebrate the legacy of the Opry, which has brought comfort, hope and joy to generations of listeners through it all.”

WSM began to air the show that would become the Grand Ole Opry in 1925 as a radio show before expanding to television and eventually digital streaming platforms. It has been on the airwaves longer than any other broadcast program of any medium anywhere in the world. It has continued to produce original shows for 5,000 Saturday nights through the Great Depression, World War II, two Nashville floods and, most recently, the global pandemic. In March 2020, when music venues shuttered around the world, the Opry continued airing under strict health and safety protocols through its weekly 650 AM WSM and SiriusXM radio broadcasts. Simultaneously, Opry Live was launched on Circle, bringing comfort to millions of fans around the world and quickly becoming the television network’s landmark series.

To celebrate the monumental longevity of the broadcast, the Grand Ole Opry will host
a special evening of music on October 30th with performances from Bill Anderson, Terri Clark, Vince Gill, Chris Janson, Jeannie Seely, Connie Smith, The Gatlin Brothers and Chris Young, with more artists to be announced. The ticketed show will be available to stream live on Circle, including its Circle All Access Facebook, Twitter, and YouTube channels.

In addition, today the Opry opened a limited-time exhibit at the Acuff House, Opry Memories: Celebrating 5,000 Saturday Night Broadcasts. The exhibit takes guests on a journey through the inception of WSM-AM radio and the first Grand Ole Opry broadcasts and continues forward covering special moments from milestone broadcast eras of 1,000 broadcasts up to present day. The exhibit will feature artifacts and photos from current Grand Ole Opry members including Luke Combs, Dolly Parton, Carly Pearce, Trisha Yearwood, and many others, as well as items from some of the Opry’s earliest stars including Roy Acuff, DeFord Bailey, Minnie Pearl, and more. The exhibit will also explore the history of WSM-AM radio, giving visitors a glimpse into the innovations that pioneered an industry and ultimately led to Nashville becoming “Music City U.S.A.”. The Opry engaged Warner Museums/Method-1 for the design, fabrication and installation of the exhibit.

“For 5,000 Saturday nights, the Opry has stood as a beacon not just for generations of listeners seeking top-notch entertainment, but for artists with big dreams and even bigger talent,” said Scott Bailey, President of Opry Entertainment Group. “This stage has witnessed some of the most iconic moments in country music – debuts, duets, and everything in between – and it deserves celebrating. We’re excited for country music fans around the world to be able to join us for this historic occasion.”

Music editor for Nashville.com. Jerry Holthouse is a content writer, songwriter and a graphic designer. He owns and runs Holthouse Creative, a full service creative agency. He is an avid outdoorsman and a lover of everything music. You can contact him at JerryHolthouse@Nashville.com
Previous Ira Dean, Jeffrey Steele & Aaron Lewis Celebrate “Am I the Only One”
Next Mitchell Tenpenny To Headline Ryman For The First time