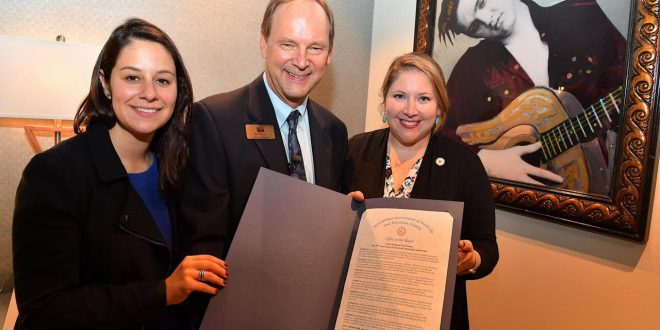 Fifty-five years after it hosted its first event – a Church of Christ revival – the Metro-owned Municipal Auditorium is celebrating the completion of major renovations to the historic venue, including a build-out of new dressing room space that is fully decorated and customized for privacy and comfortability.
Additionally, the general public will benefit from new seating that includes restored wooden chair backs and new seat cushions. Upgrades were also made to the facility’s plumbing system, ticket windows, and floors. New security measures will be implemented later this fall, including the installation of metal detectors.
“The Municipal Auditorium has played a significant role in building Nashville’s identity as a major destination for the nation’s top musical acts,”said Bob Skoney, the Auditorium’s general manager, who has worked at the venue for 40 years. “From rock and roll to R&B, to country, there is no other venue in Nashville that can boast the wide variety of performers who have graced the stage of the Auditorium. At 55 years old, this is an iconic building with a rich history, and I’m excited that the city is working in partnership with Live Nation and Musicians Hall of Fame and Museum to ensure its future.”
On Sept. 21, Skoney was joined by the Office of Mayor Megan Barry, Metro Council members, representatives of the Nashville Convention & Visitors Corporation, and the members of the Metro Auditorium Commission and the Musicians Hall of Fame and Museum to celebrate the 55th anniversary of the venue and to unveil the new dressing rooms.
“Long before Nashville was the ‘It City,’ it was the ‘Music City,’ and the Nashville Municipal Auditorium played a key role in ensuring that major musical acts such as Elvis, Natalie Cole, The Rolling Stones and Elton John could entertain local fans,” said Justine Avila, executive director of the Music City Music Council. “The renovation of the Auditorium will ensure that this city-owned facility can continue to host major musical acts and other events for years to come.”
The renovations are valued at $3.2 million and were completed as part of the city’s agreement with concert promoter Live Nation, which has a preferred concert promoting agreement with the venue and does the majority of the booking of musical acts there. Skanska USA managed the renovations to the dressing rooms.
The Municipal Auditorium opened in 1962 to satisfy Middle Tennessee’s need for a multipurpose facility that could handle a wide range of events. The 9,654-seat arena has since hosted everything from concerts to circuses, to auto shows, to basketball tournaments, to cheerleading competitions. In August 2013, the Musicians Hall of Fame and Museum became a featured tenant of the building and opened the Grammy Gallery in 2016. For a full list of concerts and other events hosted by the facility, please visit the Municipal Auditorium website athttp://www.nashvilleauditorium.com/faq/dates.asp.