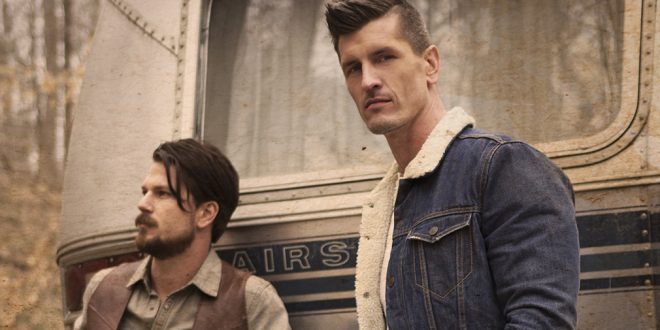 For two salt-of-the-earth, small-town guys like Brad and Curtis Rempel — the brothers that comprise bluegrass-infected country duo High Valley — little compares to interacting with their fervent fans. Yes, to hear the musicians tell it, their audience has a special way of justifying everything they’ve ever worked for.

“Fans always say, ‘Man! Your records are so upbeat and we can’t help but smile when we listen to them,’” Brad says with a smile. “That’s honestly the greatest compliment anyone could give us. Because we’re not that band that’s gonna be singing these hurtin’ and break-up and cheating songs. That’s not real life for us. There’s a lot of positivity over here.”

It’s hardly a surprise High Valley are feeling so optimistic: following decades of delivering high-octane live shows, first in their native Canada, then in the States and overseas, the two tremendously talented musicians are seeing their musical dreams come into focus like never before. “Really though, I never doubted for a second that it would all work out,” Curtis says of the occasionally painful but always progressive road to the present. “Because,” he adds, “even though it’s taken some time, every year has been than better than the previous one.”

Recently, however, High Valley’s career has shifted into overdrive: following the breakout success of their 2016 debut album, Dear Life, namely highlighted by the Gold-certified single “Make You Mine” and “She’s With Me,” the duo’s first Top 10 at country radio, the group notched two consecutive ACM nominations for New Vocal Duo or Group. High Valley was soon touring world with artists like Old Dominion and on their own headlining dates. “We’re just so very thankful that our audience is growing,” Brad says with trademark humility.

Still, the band’s colossal progress is unlikely to slow down anytime soon: having been holed up in the studio much of the past year writing and recording their forthcoming second full-length LP, High Valley now return with “Single Man,” the project’s debut single. Most exciting for their ever-expanding fanbase, it marks the first taste of what the future holds for one of country music’s most exciting acts.

“I’ve written probably 100 songs for this new record,” Brad says matter-of-factly, and while nearly all of them are intensely personal affairs, both members of High Valley insist “Single Man” may very well be their most revealing song yet. “I wanted to be brutally honest,” he explains of his motivation for penning a song that, in the process of bounding from a hand-clap aided verse to an anthemic chorus, details how “the lifestyle as a single man on the surface looks amazing. You have a relaxed accountability that comes with this sense of freedom,” and yet true happiness exists at a far more profound level. “Most importantly I wanted to write a song that said, ‘I promise you I wouldn’t be able to find any single man on this planet that if he saw what I had — my wonderful wife and my family — he wouldn’t say, “Dude! Can we please trade places?’”

It’s been a journey for High Valley to arrive at such a blissful moment. They were raised in the isolated Canadian town of Blumenort, Alberta, where contemporary pop music was inaccessible. By age 12, however, having grown up performing in church with family members, Brad says he was already dead-set on his future as a professional musician. “Anybody that knew me at that age would say I was very insane and hardcore about making it work,” he admits with a laugh. High Valley was soon formed, with Curtis’ harmonies and signature mandolin joining Brad on the road. By their early twenties, they’d been consistently gigging more than 100 times per year and slowly refining their signature country-stompin’ sound inspired in by their few sonic influences: the bluegrass bounce of Ricky Skaggs, the blood-harmonies of the Everly Brothers, dashed with a dose of Buck Owens’ traditional country songcraft.

They decamped to Nashville earlier this decade, quickly building a cult following thanks to beloved indie releases like 2014’s County Line EP. By late-2015 they’d landed a deal with Atlantic/Warner Nashville; a few months later “Make You Mine” was burning up the charts.

Curtis recalls playing a gig in Boston circa this time and it was then he realized everything had changed for his band. “We had never played in that city before and the room was packed and they were literally screaming ‘Make You Mine’ back in our faces as loud as they possibly could,” he recalls. “It hit home right then that this was all really happening for us.”

Fast-forward a few years, and with “Single Man” now in the world’s hands as well as a brand new album squarely in their crosshairs, High Valley are nothing short of elated at what the future holds for them. Still, much as always, the musicians remain supremely grateful about where life has taken them. “It’s a special thing to know that the work you put in is a part of so many people’s lives,” Brad says proudly. “That’s a pretty huge gift.”

Music editor for Nashville.com. Jerry Holthouse is a content writer, songwriter and a graphic designer. He owns and runs Holthouse Creative, a full service creative agency. He is an avid outdoorsman and a lover of everything music. You can contact him at JerryHolthouse@Nashville.com
Previous CMA Songwriters Series Returns To Tin Pan South
Next Buddy & Julie Miller To Release First Album In A Decade