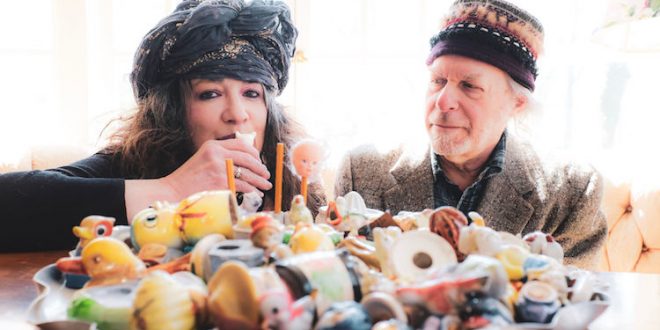 Buddy & Julie Miller To Release First Album In A Decade

Buddy & Julie Miller are set to return with Breakdown on 20th Ave. South, their first album in a decade, on June 21st, 2019 via New West Records. The 12-song set was produced by Miller and follows their Written In Chalk, released in 2009. Three individual seven inch singles featuring songs from the album will be released physically in the months preceding its release.

Both Buddy & Julie Miller admit that Breakdown on 20th Ave. South took longer than expected. After initially starting work following the release of Written in Chalk in 2009, Julie was waylaid by health issues she continues to battle. With time on his schedule, Buddy became more in-demand than ever as a collaborator for Robert Plant & Alison Krauss during their Raising Sand tour and producing standout albums by Plant, Solomon Burke, Richard Thompson, Shawn Colvin & Steve Earle, Patty Griffin, The War & Treaty and more. He also joined T Bone Burnett on the musical team working on the hit ABC-TV series Nashville, and following Burnett’s departure, became the show’s Executive Music Producer.

“I wrote the song ‘I’m Gonna Make You Love Me’ as a message to Buddy, because we kept putting off making our album because he was so busy,” Julie says of the song that set the stage for Breakdown on 20th Ave. South. “In my mind I thought I was always about to get back to work with Julie, but in reality I kept getting put off,” Buddy says. “I apologized a lot. I look back, and I realized I was neglectful. It was a mistake I wish I hadn’t made. What Julie and I create together is fulfilling to me in a way nothing else is, and I should have nurtured it more.” Julie acknowledges the tension that arose in the years between recordings. “It took me too long to communicate how I was feeling,” she said. “I felt as if I was waiting for my turn. I know he feels guilty about it. I was ill, and I was depressed, and that complicated everything. Once he realized how I felt, he was incredibly gracious and he really focused on helping me craft what I wanted to create.” Once Buddy and Julie began work on Breakdown on 20th Ave. South, Julie wrote an astonishing 50 to 60 new songs to select from.

Recording began with “I’m Gonna Make You Love Me,” in the couple’s bedroom located upstairs from Buddy’s famed home studio where Robert Plant, Emmylou Harris, Solomon Burke, and countless others have cut albums. Encouraged by the emotional clarity and bare-boned punch of the initial recording, they continued cutting basic tracks in the room that Julie dubbed “Studio B,” a play on the historic Nashville recording studio RCA Studio B (which isn’t far from the Miller’s home). The bedroom recordings give the album a distinct intimacy and sound built upon Julie’s expressive voice & Buddy’s harmonies and propulsive instrumentation. “After that first song, we wanted the record to be just us,” Buddy said. “The songs are all Julie’s, and she wanted the sound to be as raw as the lyrics are.”

From the driving title track, in which Julie exposes her personal and creative dilemmas of the last several years, to songs that explore hard-fought affection, spiteful anger, and spiritual sustenance, the album confronts difficult subjects with the poetry and the persistent, heart-bearing honesty fans expect from the Millers. Breakdown on 20th Ave. South reveals both the scars and the healing. The music is fueled by madness and love, and by passion and patience – all qualities that go into a working, evolving marriage involving two sensitive, wildly creative individuals.

A special release show celebrating Breakdown on 20th Ave. South has also been announced for Wednesday, June 26th at City Winery in Nashville, TN. Buddy & Julie are scheduled to perform and the live show will be recorded for later broadcast on the Buddy & Jim Radio Show, the longtime radio program Buddy Miller has co-hosted with friend and songwriter Jim Lauderdale, on SiriusXM’s Outlaw Country Channel. Tickets will go on sale this Thursday at 3pm Central.

Music editor for Nashville.com. Jerry Holthouse is a content writer, songwriter and a graphic designer. He owns and runs Holthouse Creative, a full service creative agency. He is an avid outdoorsman and a lover of everything music. You can contact him at JerryHolthouse@Nashville.com
Previous High Valley To Release “Single Man” On 4/3
Next Music Health Alliance Raises Over $500,000.