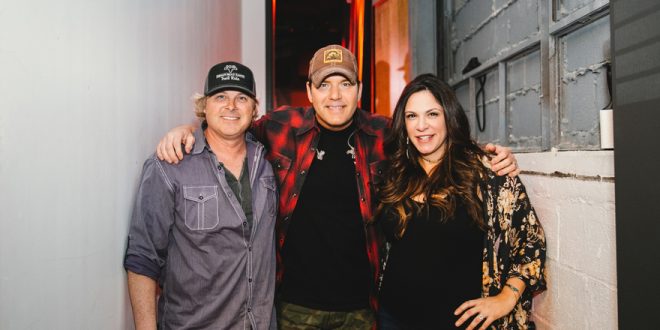 The songwriters performed a wide range of songs they’ve written. Minor, who performed Kenny Chesney’s “Live A Little,” which he co-wrote with David Lee Murphy, had the crowd hysterical prior to the song as he acted out his best Chesney impersonation. Minor later invited his 12-year-old daughter Maggie to the stage to perform Sara Evans’ “Suds In The Bucket,” which was followed by a standing ovation from several in the audience. Falcon performed “Whiskey and Water,” which she joked was “a true story I made up” about a casino worker she’d met in Minnesota as well as “Say No To Love,” which was performed by Will Chase’s character Luke Wheeler on the hit ABC series “Nashville.” Atkins performed several of his hits including “Farmer’s Daughter,” “Take A Back Road,” and “If You’re Going Through Hell,” which he shared a story about his then 4-year-old son getting in trouble at school for singing the song. He then treated the audience to his new song “Caught Up In The Country” to close the show.

Music editor for Nashville.com. Jerry Holthouse is a content writer, songwriter and a graphic designer. He owns and runs Holthouse Creative, a full service creative agency. He is an avid outdoorsman and a lover of everything music. You can contact him at JerryHolthouse@Nashville.com
Previous 650 AM WSM Hosts Inaugural Music City Mentors Program
Next High Valley To Release “Single Man” On 4/3