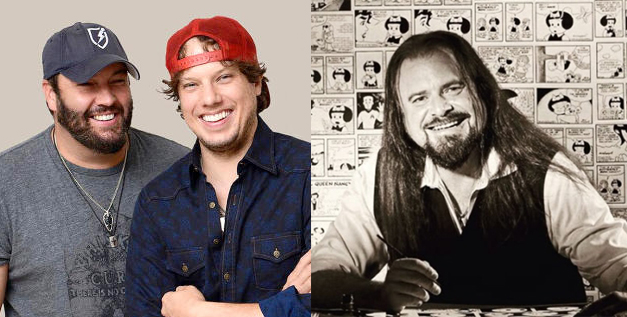 Mercury Nashville/StyleSonic Records recording artists, Halfway to Hazard and world-renowned comic strip artist, illustrator and author, Guy Gilchrist have partnered to pay tribute to the lateTroy Gentry (of the duo Montgomery Gentry), who was killed in a helicopter crash in September 2017.

The “Tribute to Troy Gentry” will be held this Thursday, June 14 from 6 to 9 P.M. at the Mary Hong Gallery(414 Union Street–on the ground floor of the Bank of America building in downtown Nashville) and will feature acoustic music performances by duo Halfway to Hazard, Gilchrist and other surprise guests. Samples of John Rich’s Redneck Riviera Whiskey, wine, and hors d’oeuvres will be served. Gilchrist will also unveil and present an original work of art to wife Angie and daughter Taylor in honor of Troy. The event is FREE and the public is invited to attend.

The dedication is the brainchild of Gilchrist, whose “Nancy Loves Nashville & The Muppets Take Music City” exhibit opened on June 2 at the Mary Hong Gallery and will remain on display through the end of the month. The exhibit features over 18 hand-painted stringed instruments (as a nod to Nashville’s “Guitar Town” branding), as well as original pen & ink drawings, comic strip panels, and rare cartoon memorabilia.

“As I was putting together the exhibit, I was thinking about all the artists I have been so blessed to work with over the years,” explains Gilchrist.“This, being my first Nashville exhibit since Troy’s passing, it seemed only fitting to honor his life, at this time, through art–something to which we both dedicated our careers.”

This is not the first time Gilchrist has honored Troy Gentry. The illustrator featured Montgomery Gentry several times in the comic strip “Nancy,” most notably in October 2009, when they were actually drawn as characters in a Sunday edition of the strip.

“We grew up just south of where Troy and Eddie got their start–we even played some of the same clubs,” explains Tolliver, “so when we got the invitation to be a part of this, we jumped at the opportunity.”

“His shoes will never be filled–Troy Gentry left a indelible mark on Country music,” adds Warrix. “As fellow Kentuckians, we wanted to celebrate that.”

The Guy Gilchrist exhibit “Nancy Loves Nashville & The Muppets Take Music City” will be on display through June 30 at the Mary Hong Gallery. Hours are Tuesday through Saturday, from 10 a.m. until 5 p.m., excluding special events. For more information, please call 615-423-0818 or visit MaryHongStudio.com.

Music editor for Nashville.com. Jerry Holthouse is a content writer, songwriter and a graphic designer. He owns and runs Holthouse Creative, a full service creative agency. He is an avid outdoorsman and a lover of everything music. You can contact him at JerryHolthouse@Nashville.com
Previous Dierks Bentley Scores His 17th Career No. One
Next Sister Hazel Partners With Shatterproof To Spotlight Addiction And Recovery