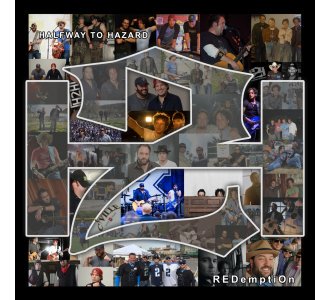 New 10-track Compilation Available for Purchase Now at Amazon, iTunes
and All Digital Retailers
For the first time in nearly a decade, country music duo Halfway to Hazard is back with new material. The album, appropriately titled, REDemptiOn, is available for purchase now.
Upon their debut to the country music scene in 2007, Halfway to Hazard hit with a rapid cannon fire. Suddenly the duo was opening for superstars Tim McGraw and Faith Hill and were making major label records with big time producers and engineers in famous studios. David Tolliver and Chad Warrix struggled to find balance between artistry and life, and the rigors of breaking through as a new artist. Tolliver especially struggled with the newfound success and celebrity status. Eventually, Halfway to Hazard hit a breaking point.
“We had to take a several year break from each other and the business to save our friendship,” says Warrix. “The stop in momentum definitely damaged our rise to the top. But we are repairing the broken pieces of the puzzle and finding new ways because of our experience and knowledge to find success.”
Following the duo’s last album release in 2009, the two Kentuckians chose to take a break from their country music career. During that time, Tolliver focused on his career as a songwriter, while Warrix also kept writing songs and continued to perform on the road as a guitarist for various artists.
When Tolliver and Warrix reunited and made the decision to record new music, they didn’t rush the process. Both are now in different places in their lives and wanted to draw from that. They wanted quality music that accurately reflected their current whereabouts in life.
“This new project means a lot to me,” says Tolliver. “We took some time off, we had success before and we also had some heartache. Making this new album helped heal wounds and also brought back great memories of why we started doing this in the first place, to make music and play music.”
Warrix adds, “The REDemptiOn album was a long time coming, I felt like we were just meant to make more music years ago but because of certain circumstances, we didn’t get that chance. So, for me, it’s been really important to get new music out that represents David and I not just as songwriters but also as artists.”
The album’s first single, “Heaven on Down The Highway” is especially important to the duo because of its message of redemption. “It’s about looking forward to the future and not dwelling on a past that you can’t change. This life is short and we need to ‘rip off that rearview’ and enjoy what is in front of us,” Tolliver says.
“I’m in love with the whole concept of this album, REDemptiOn, because to me each one of these songs represents our growth as writers and artists in a town of so many gifted people,” Warrix explains.
The project contains 10 all-new tracks, most of which are self-penned by the duo, and is produced by Tolliver, Warrix, and Matt McClure. The album is available via Picnic Hill Records.
REDemptiOn is available for download now at Amazon, iTunes and all digital retailers.
REDemptiOn Track Listing:
1. Thank God That You Do
2. Heaven on Down the Highway
3. Meet Me in Vegas
4. Love It Round Here
5. Breaking Me
6. American Outlaw
7. Story of Me
8. Let’s Fight
9. Girls Like That
10. Rebel Spirit
About Halfway to Hazard
Halfway to Hazard is an American country music duo composed of singer-songwriters David Tolliver and Chad Warrix. Though Tolliver and Warrix grew up in different towns in southeastern Kentucky, their group originated in Hazard, Kentucky, which was halfway between their hometowns. The group’s debut album, Halfway to Hazard, peaked at #14 on the Billboard Country Albums chart, landing them a Top 20 album straight out of the gate. Byron Gallimore and country music superstar Tim McGraw co-produced the project. Included on the album was their debut single, “Daisy,” which earned them a Top 40 hit on the Billboard Hot Country Songs chart in 2007. As a songwriter, Tolliver has penned songs that were later recorded by Tim McGraw, Brantley Gilbert, Jerrod Niemann, and more.
For more information on Halfway to Hazard, visit halfwaytohazard.com.