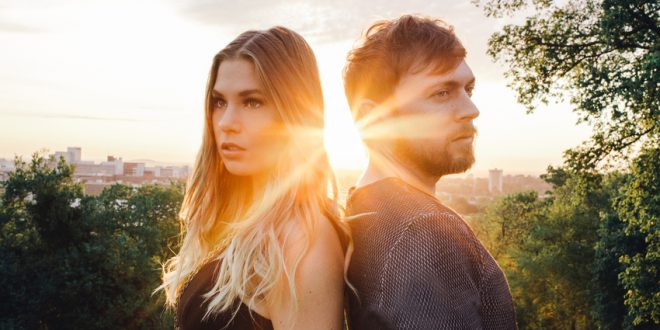 Emerging country duo, Indigo Summer, is set to release their self-titled debut album on October 20, 2017. The duo, comprised of Bryan Edwards and Hope Nix, are each experienced singer-songwriters in their own right. Edwards and Nix initially joined forces as songwriters, but the chemistry was undeniable. The two quickly started performing together – The rest, as they say, is history!

The duo is excited to introduce themselves to the world with their debut album.“This album is our big ‘Hello!’ to the world. This body of work fully represents the beginning of who we are. I know we will grow as artists, but this is our foundation and the house we are building is big enough for everyone,” says Edwards.
As the duo’s name suggests, Indigo Summer’s music is fun and energetic. Their songs are true to their country roots yet they are not scared to push the boundaries of today’s country music. Pushing the confines was exactly what they did with their debut album.
The members of Indigo Summer are proud to have co-written all twelve songs on their debut album. Produced by the Indigo Summer’s own Bryan Edwards and David Dorn, the duo was able to shape a fresh new sound. “This is our first album as a duo. I am proud of all of the songs on this record, as well as, the unique sound we created. There are lots of upbeat, fun, beachy songs that I think will have people singing along with their windows rolled down, and then there are a few very vulnerable, emotion-driven songs. There is definitely a song for everyone on this album,” continues Nix.
Enjoy the summer a little longer, listen to “A1A,” the first song released from Indigo Summer’s debut album here.
Track Listing:
About Indigo Summer: Indigo Summer is taking country fans by storm with their self-titled debut release. Featuring all original songs co-written by the duo, Bryan Edwards and Hope Nix, the full-length album is sure to add a fresh and exciting sound to country music.  Meeting at a songwriter’s night at Nashville’s famed Hotel Indigo in December of 2010 (hence part of the duo’s name), Hope and Bryan quickly hit it off with their musical similarities. The two began writing together and from those sessions, their partnership grew to include performing and producing together.
As solo artists, they have performed across the country and opened for some of the biggest names in the industry, including Keith Urban, Jason Aldean, and Charlie Daniels. As songwriters, they have had numerous cuts and TV placements, including songs recorded by Jason Aldean and featured on the Discovery Channel.