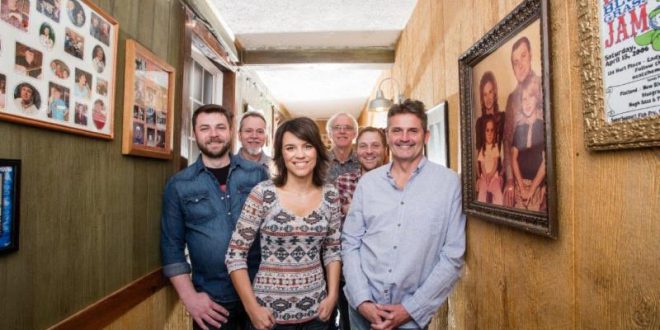 The Grascals Explore Dark Side Of Love With New Single, “Sleepin’ With The Reaper”

Track Premieres On Roughstock Today; Award-Winning Band Performs On Grand Ole Opry© Tomorrow
The Grascals explore the dark side of love with their newest radio release, “Sleepin’ With The Reaper.”  The track, the first single from their upcomingSeptember 1 album, BEFORE BREAKFAST (Mountain Home Music Company), premieres today on Roughstock.  Radio can access the tune via AirPlay Direct, and fans who pre-order the music here will receive “Sleepin’ With The Reaper” as an instant “grat track.”  Nashville area concert-goers can catch the award-winning band at the Grand Ole Opry tomorrow night.
Written by hitmakers Grant Williams and Becky Buller, the song is the first collaboration for the two.  Notes Buller, “Grant had the idea to write something around the old saying ‘We don’t believe in divorce … murder, maybe … but never divorce’ and it just took off from there.  The Grascals liked the creepy little tune and made it sound so fine.”  Creepy it is – taking the listener from “I do” to “I don’t” in three short minutes … but it is saved from pure melancholy by John Bryan’s urgent vocal, a fast-moving track and the group’s superb picking.
With the echo of I do still ringing in my ears
She said you need to know what I believe
I’m a Christian woman, now you’re a married man
Death is the only way to leave
She said I don’t intend to let you tell a lie
You crossed your heart and hoped to die
One way or the other, who’s it gonna be tonight
Will you be sleeping with the reaper or me, tonight?
Sleeping with the reaper or me?  Buller/Williams
“Sleepin’ With The Reaper” kicks off BEFORE BREAKFAST and, while it’s a departure for the group, it’s a natural fit as the band continues to develop and meld organically.   This is the second album for this configuration of The Grascals and their growing closeness is obvious.  The current group features founders Terry Eldredge (lead vocals, guitar), Terry Smith (lead vocals, bass) and Danny Roberts (mandolin), plus fiddler Adam Haynes, John Bryan (lead vocals/guitar), and banjo ace Kristin Scott Benson, 2017 IBMA nominee for Instrumental Performance of the Year and Banjo Player of the Year.
About The Grascals
Timely yet timeless, The Grascals deliver cutting-edge Bluegrass that is entirely relevant to the here and now, yet grounded in a deep knowledge of, and admiration for, the work of the music’s founding fathers.  It’s a unique sound that has earned the group three Grammy® nominations and two Entertainer of the Year awards from the International Bluegrass Music Association, as well as a level of national media attention that seems to perpetually elude acts from various niche genres.  High-profile appearances include The Tonight Show with Jay Leno, Fox & Friends, The Late Late Show with Craig Ferguson, and CBS’ The Talk.  The bastions of Country and Bluegrass continue to welcome them, as evidenced by 150-plus performances on the Grand Ole Opry.  Additional honors include President Barack Obama’s Inaugural Ball at the Smithsonian and two performances for President George W. Bush.
Stay social:
The Grascals
www.grascals.com
FB: https://www.facebook.com/grascals/
Instagram:  https://www.instagram.com/thegrascals/
Twitter: @TheGrascals  https://twitter.com/TheGrascals
Mountain Home Music Company Website:
http://mountainhomemusiccompany.com/