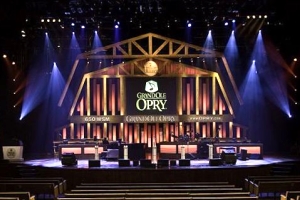 The Grand Ole Opry will celebrate the 75th anniversary of Bluegrass music on Saturday, December 5 with appearances by Opry members Del McCoury, a member of the Bluegrass Hall of Fame, and Ricky Skaggs, a member of both the Country Music and Bluegrass Halls of Fame. The two will be joined by Sister Sadie, recently named 2020 International Bluegrass Music Association Entertainers of the Year. After years in its development, bluegrass as we know it today was born on the Opry stage at Nashville’s Ryman Auditorium on December 8, 1945. It was on that night that Earl Scruggs made his Opry debut with Bill Monroe’s Blue Grass Boys that included Lester Flatt, and just three months later the historic line-up that would serve as the prototype for the bluegrass sound was complete: Monroe on mandolin, Scruggs on banjo, Flatt on guitar, Chubby Wise on fiddle, and Howard Watts on bass.

The Opry’s two-hour Saturday night show will include a one-hour broadcast on Circle and Gray TV stations and will also be seen on DISH Studio Channel 102, Sling TV, and other TV affiliates. Circle’s Opry Live is also available on 275 million smartphones and tablets via the Roku Channel and XUMO apps in addition to a companion livestream on Circle All Access Facebook, YouTube and Twitter. The December 5th Circle show will air at a special time: 7 p.m. Central, 8 p.m. Eastern. The Opry can also be heard on WSM Radio, wsmonline.com, opry.com and SiriusXM Willie’s Roadhouse.

Earlier this month, the Opry resumed Friday night performances and expanded both Friday and Saturday night shows to two hours. In-venue audiences continue in compliance with operating plans developed in collaboration with the Nashville Public Health Department that include socially distanced seating, mandatory masks for all guests and staff, as well as enhanced cleaning practices.

Music editor for Nashville.com. Jerry Holthouse is a content writer, songwriter and a graphic designer. He owns and runs Holthouse Creative, a full service creative agency. He is an avid outdoorsman and a lover of everything music. You can contact him at JerryHolthouse@Nashville.com
Previous Florida Georgia Line Address Rumors Of Breakup
Next PREMIERE: Stuffy Shmitt’s “Sweet Krazy”