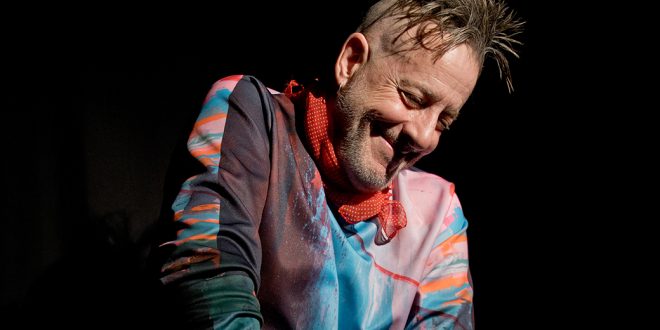 Today Nashville.com is happy to premiere the energetic first song from Stuffy Shmitt’s first record in eight years, “Sweet Krazy” (Listen here). Why eight years? Because, well, he went crazy. “I was living in New York and my brain was on fire. I got that bipolar thing. I was bouncing between full-blown depression and a jailbreak manic buzz rush. After nearly a decade of getting 86’d from bars in the West Village, I made it to Nashville six years ago and finally got my head screwed on tight enough to make a new record. When I first moved to Nashville, my New York City depression moved with me, but I’ve bounced back hard now, who knows why—the caliber of players down here maybe, or the East Nashville community that adopted me and my music.”

The new album, Stuff Happens finds Shmitt not quite exorcising his demons, but exercising them—wrestling with them until they’ve been knocked around enough to be manageable. “I didn’t realize until the record was finished and my wife, Donna, pointed it out,” Stuffy says, “but this album is all about trauma. Disasters big and small. It was an accident, though. It was all subconscious. I guess, eventually, that shit’s gotta come out.”

“Sweet Krazy” was produced by Chris Tench, co-produced by Brett Ryan Stewart and Stuffy, and features Stewart on backing vocals, Parker Hawkins on bass, Dave Colella on drums, plus Tench, Tasjan and Wright ripping it up on guitar. “Singer/songwriter Aaron Lee Tasjan, who played in my band and on my records in New York, moved down to Nashville about the same time as I did. He introduced me to an unbelievable songwriter and rip-it-up guitar player named Brian Wright. One night I exploded all manic, scream-writing this song “Sweet Krazy” in my car, and called up Chris, Brett, Brian, Aaron, Dave and Parker, and said, let’s rock this one, boys.”

A madcap tour through the folds of Shmitt’s charmingly off-kilter brain, Stuff Happens runs the full spectrum of manic depression in glorious stereophonic sound. There are bizzaro blues rockers and exhausted, desolate Americana ballads—some bleak to the bone, and others begrudgingly grasping at hope; never so naive as to look for a silver lining, but dogged enough to skim the horizon for the dull glimmer of aluminum. And when you need a jolt, there’s plenty of naked, unapologetic, torn-and-frayed American rock & roll to carry you kicking and screaming through all that beautiful sad-bastard music; the full-tilt end of the spectrum best represented by “Sweet Krazy,” a revved-up ode to mania that features fellow Nashville songsmith guitar shredders Aaron Lee Tasjan & Brian Wright.

The lush sonics of Stuff Happens make a compelling backdrop for Shmitt’s austere, blunt-force poetry and gutter-of-consciousness lyrics. His songs are disarmingly direct and personal, built with words you might find scrawled on a crumpled napkin in some sawdust jukebox bar with chicken wire on the window and a pig foot in the jar. These are not your garden variety genericana tunes. He’s weird. And honest, too. When he opens his mouth to sing, Shmitt can’t help but tell the truth, consequences be damned. Even when he’s doing his best to lie his scoundrel ass off, he falls face first into the truth. His stories are our stories. He makes us feel stuff.

The performer/actor grew up in Milwaukee in a family every bit as wild and unhinged as he is. “I don’t come from a family with a culture of tradition. I had a drunk drummer mother who wrote poetry in her sleep, and a dad who played guitar and had a thing for fast cars. We read a lot of books, listened to a lot of music and protested social injustices. Our home was loud and nasty and violent. We didn’t spend a lot of time hugging or talking about feelings. We didn’t have religion. I didn’t understand spirituality until I dropped acid as a teenager, and when I nearly died of pneumonia a while back. And then I got manic, which comes with superpowers and parties with angels.”

Music editor for Nashville.com. Jerry Holthouse is a content writer, songwriter and a graphic designer. He owns and runs Holthouse Creative, a full service creative agency. He is an avid outdoorsman and a lover of everything music. You can contact him at JerryHolthouse@Nashville.com
Previous Grand Ole Opry To Celebrate 75th Anniversary Of Bluegrass Music
Next Caroline Jones Goes Bluegrass For Christmas