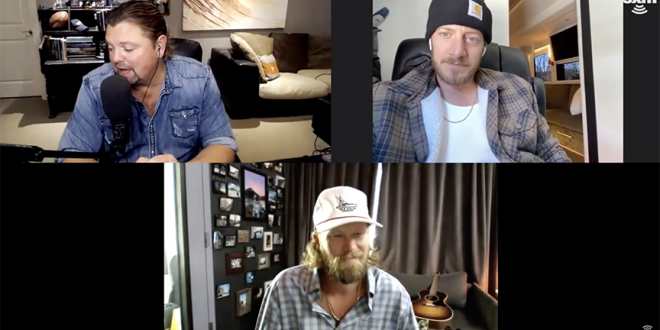 SiriusXM announced a slate of exciting new podcasts today available on the SiriusXM app including Exit 209 with Storme Warren. Exit 209 with Storme Warren features SiriusXM’s Storme Warren tracing the humble beginnings of country music’s biggest stars. The podcast launched today with Florida Georgia Line’s Tyler Hubbard and Brian Kelley featured as the first guests. Storme Warren discussed with Tyler Hubbard and Brian Kelley how the duo got their start, how their fans have helped shape their career and how being named a SiriusXM Highway Find was “the foundation of our career.” Additionally, Storme Warren addressed the possible riff between the duo after some recent social media “drama”

Storme Warren: Growth as a duo, growth as friends, growth as everything. Uh, let’s get the social media elephant out of the room. Little chatter over the past few days over a possible riff between you two, much ado about nothing you want to clear the air here?

Tyler Hubbard: Yeah, we can clear the air. Uh, I got a funny, somebody sent me an article two days ago that me and BK were breaking up and I thought, ‘well, that’s that’s news to me.’ But no, we just, you know, um, I unfollowed BK for a few days while we were through this political, you know, in the middle of this election and everything going on. And, and I even called him and told him, I said, ‘Hey buddy, I love you. And I love you a lot more in real life than on your stories right now. So I’m just going to, so that’s why I’m unfollowing you. Nothing personal. I still love you. You’re still my brother.’ I just didn’t want to see it every time I opened Instagram. And so it wasn’t a big deal. Like, like we, like we said, we’re, we’re on great terms. We’re feeling stronger than ever. We’re loving and supporting each other through even all the chapters that we’re in now and, uh, excited for the future. But thought it was pretty, pretty, uh, humorous and entertaining that somebody took the time to notice that in the first place and then turn it into a story that FGL is breaking up. So anyways, that being said, we can’t wait to go on tour next year together.

Brian Kelley: Yeah. Yeah. We were literally on a call yesterday, just showing up the last details of our record and working on getting some touring cities out here soon and a couple of announcements, but, um, no, just in that came through in the middle of our team call and we’re just like, well, that’s interesting we are on a phone call together right now talking about the future. So pretty interesting.

Tyler Hubbard: I might unfollow BK again tomorrow just to keep the media talking about it.

Brian Kelley: We are going to go full WWE on this thing.

Storme Warren: You know, Hey, tensions are high, opinions are strong and this is an interesting time. And, as a duo it’s your differences that are, make it work. It’s the differences that, uh, that bring the creative juices together. So, I mean, it’s not just music, it’s, it’s politics, it’s life it’s values. I mean, sure. You guys don’t agree on, uh, you know, a lot of other things as well. I’m sure.

Tyler Hubbard: Well, we’ve always said we really complement each other well, you know, we’re a lot, we’re a lot different, but we’re also a lot alike, you know, and fundamentally we do think a lot of like, you know, politics is created innately to divide. There’s a right and a left and there is no middle, there, there might be a middle, but ultimately politics is created for division. So, you know, as it relates to politics, we might have different views or different set of opinions or different of, you know, the way we perceive our leaders, but ultimately we’re a lot alike and we, and we think a lot alike and we, you know, we, we both believe in God and we both put our faith in him and we know that he’s in control over Donald Trump or Joe Biden. So we’re, uh, we’re, you know, we’re voting Jesus and, and our world and, uh, letting him, you know, kind of trusting that he’s in control and letting our risks come there.

Storme Warren: We had never heard much of a ripple ripples in the relationship between the two. This is the first one. I think it stunned us. I think it’s like when we saw our mom and dad fight for the first time, you know.

Tyler Hubbard: Okay, well, I’ll, let me also say this because the truth is we are, we are, we have been on a 10 year relationship, a 10 year partnership, a 10 year commitment to each other. And yes, there have been hard times. It’s not all, it’s not all sugar coated. And so the truth is, and I think this is important to talk about me and BK have done work. We’ve went to therapy, we’ve sat with each other and wanting to kill each other at times. But by the end of it, we were hugging it out. You know what I mean? Because we’re brothers and that’s what brothers do. And, and brothers don’t always get along. So we’ve had, we’ve had moments where we, you know, where we want to kill each other, but a lot of it’s out of love. And so we, we, uh, we put that first and foremost and we know the importance of our relationship and how much, you know, how much love we have for each other. So we have worked over the years, we’ve worked to become stronger and stronger and stronger, and that’s even through the hard times, it’s made us stronger as friends and brothers and partners. So we’re really thankful for it.

Music editor for Nashville.com. Jerry Holthouse is a content writer, songwriter and a graphic designer. He owns and runs Holthouse Creative, a full service creative agency. He is an avid outdoorsman and a lover of everything music. You can contact him at JerryHolthouse@Nashville.com
Previous PREMIERE: Aria Mae’s “Smoke Screen Dreams”
Next Grand Ole Opry To Celebrate 75th Anniversary Of Bluegrass Music