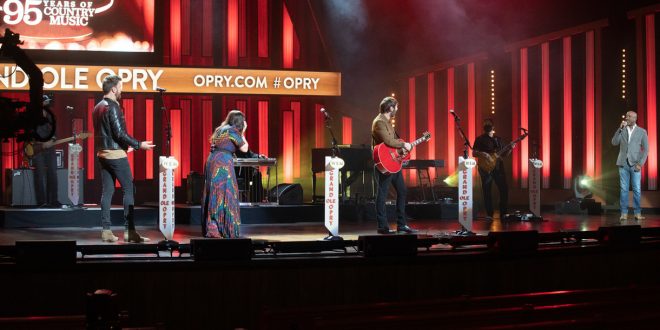 The Grand Ole Opry opened up performances last weekend to full capacity for the first time in more than a year. The Opry’s two newest members, Lady A and Rhonda Vincent, were among those featured on weekend shows. Both artists officially joined the Opry in the midst of the COVID-19 pandemic. Two rising artists, Ryan Hurd, and Brittney Spencer, stepped into the circle for the first time, making their Opry debuts on this first full capacity weekend. Superstar Maren Morris made a surprise appearance with husband Hurd on their hit “Chasing After You,” and Hurd joined Lady A for their hit he co-wrote, “What If I Never Get Over You.” Charles Esten, Lorrie Morgan, Oak Ridge Boys, Michael Ray, and more were also featured throughout the weekend.

“It was tremendous to see so many fans who have been tuned in to the Opry via our livestream, television, and the radio over the past 15 months back in the Opry House enjoying live music this weekend,” said Opry Executive Producer Dan Rogers. “We’ve missed this, and we look forward to doing it again on every Tuesday, Friday, and Saturday the rest of the year!”

Music editor for Nashville.com. Jerry Holthouse is a content writer, songwriter and a graphic designer. He owns and runs Holthouse Creative, a full service creative agency. He is an avid outdoorsman and a lover of everything music. You can contact him at JerryHolthouse@Nashville.com
Previous LISTEN: Joe Nichols‘ “Home Run”
Next Tim O’Brien’s “He Walked On” Drops June 25th