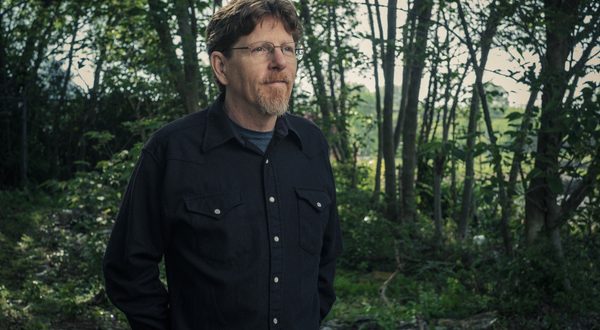 “The project is about what you need to do to survive in America,” says Tim O’Brien, about his latest album, He Walked On (June 25, Howdy Skies). Through its bakers’ dozen tunes, eight new originals and five covers, He Walked On is an expansive portrayal of the nation from its beginnings to the present day through a series of musical snapshots, each training its lens from a different angle: humor, humanity, solidarity, grace.

Produced by Tim, the album was recorded in October 2020 – January 2021 in Nashville with the core band of Mike Bub (bass), Pete Abbott (drums), and Tim on vocals, mandolin, fiddle, guitar, mandola and mandocello, you name it. Hear the first single, “I Breathe In” (written by O’Brien).

The album opener, “When You Pray (Move Your Feet)” takes its title from the African proverb that was a favorite of the late Civil Rights hero Congressman John Lewis. “Can You See Me, Sister?” explores, through an imagined encounter between two of Thomas Jefferson’s children with the enslaved woman Sally Hemings.

With “We’re In The Same Boat, Brother,” written by “Brother, Can You Spare A Dime” lyricist Yip Harburg, O’Brien reaches back nearly 80 years for a call to solidarity that still feels timely. The disc image for He Walked On is an American nickel, the slogan E Pluribus Unum – “out of many, one” – prominent on top: these songs, together, make up a picture of who we are.

“You talk about the music, where would we be in America if we didn’t have this mix of people from Africa and Europe and Native Americans,” says Tim. “We’re family, but we’re estranged, and we’ve never learned to be family in so many ways. And it’s crazy, and we’re still suffering from that. If you read James Baldwin – America’s insane. And until we figure out how to actually deal with reality here, we’re just going to stay insane.”

Other highlights include the Latin-tinged “El Comedor,” co-written with O’Brien’s fiancée Jan Fabricius, reflects on time the couple spent last year at the Mexican border near Tucson, visiting with a grassroots humanitarian group that offered water and food to hopeful immigrants waiting for asylum.

The stark, solemn banjo cut “Five Miles In and One Mile Down,” a tune by the Texas songsmith Dale Keys, indicts the neglect and greed that led to the Upper Big Branch Mine disaster in 2010, in O’Brien’s home state of Virginia, where 29 miners died. It resonates again in the wake of 2020, when so many workers were put squarely in harm’s way of a deadly virus in service of someone else’s dollar. His cover of “That’s How Every Empire Falls,” written by R.B. Morris and more famously recorded by John Prine, is a loving tribute to the latter, O’Brien’s friend who died of COVID – and also, with its theme of responsibility to our fellow man.

“When you sing something, it kind of sneaks in, in that music is a powerful medium,” O’Brien says. “It’s a language that’s mysterious on its own – it tugs on the emotions. It grabs people’s attention in a certain way and prepares them to hear things, and music kind of draws people together.”

Music editor for Nashville.com. Jerry Holthouse is a content writer, songwriter and a graphic designer. He owns and runs Holthouse Creative, a full service creative agency. He is an avid outdoorsman and a lover of everything music. You can contact him at JerryHolthouse@Nashville.com
Previous Grand Ole Opry Returns To Full Capacity
Next Blackberry Smoke Announces “Spirit Of The South Tour”