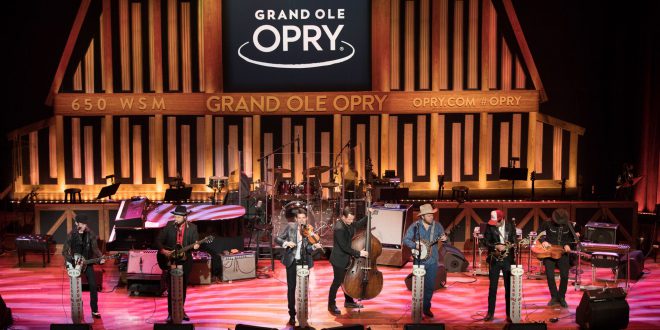 “We’re really excited about this incredible opportunity to take the Grand Ole Opry to Bonnaroo,” said Sally Williams, Senior Vice President of Programming and Artist Relations for Opry Entertainment Group. “In Nashville we host up to six Opry performances a week. Each one showcases eight to twelve artists ranging from straight ahead country to bluegrass to Americana. I think the diverse, multi-generational shows that we create on a regular basis will really resonate with the Bonnaroo music aficionados.”

“Celebrating the rich cultural legacy of Tennessee and the region has been an important part of the Bonnaroo experience from the beginning,” said Ashley Capps, President, AC Entertainment. “It’s hard to imagine anything more iconic and exciting in that regard than the Grand Ole Opry…it’s like the ultimate…a profoundly historic moment for all of us at Bonnaroo and something we’ll be talking about – and building upon – for years to come.”

Grand Ole Opry at Bonnaroo will be heard at opry.com and wsmonline.com, Opry and WSM mobile apps, and the shows’s flagship home, 650 AM-WSM. Station personality Bill Cody will serve as show announcer.

Grand Ole Opry at Bonnaroo joins a stellar list of artists and headliners at the festival, including Eminem, The Killers and Muse and artists ranging from Sturgill Simpson, Bon Iver, Khalid, Paramore, Sheryl Crow, T-Pain and more.  Click HERE for the Bonnaroo lineup and tickets!
Grand Ole Opry at Bonnaroo is just one of the several planned ways the festival will be celebrating its host community of 17 years. Also new this year Bonnaroo is partnering with Nashville Convention & Visitors Corpand the local Maker space Fort Houston to create The Ville (formerly The Grind). Located in the campgrounds, The Ville will feature local Nashville food, art and more, including Third Man Records, 8th& Roast Coffee and Project 615. The new offerings also include Farm to Taco Nashville and Prince’s famous and legendary hot chicken, known worldwide as the original and gold standard in hot chicken.

Bonnaroo is a truly global event, with tickets purchased in all 50 states and over 40 countries around the world, and was hailed by the New York Times as the summer event that “revolutionized the modern rock festival.” The 2018 Bonnaroo Music and Arts Festival will, as always, feature the comprehensive span of boundary busting diversity fans have come to expect, with an extraordinary array of artists performing around the clock across 10-plus unique stages over the four-day event. The new collaboration with the Opry brings together two unparalleled cultural and entertainment experiences that can only be found in Tennessee.

The Grand Ole Opry showcases the best in country music to fans around the world several times each week. Throughout its 92-year history, the show has also welcomed guests from numerous genres and walks of life, Rock & Roll Hall of Famers, Academy Award-winning actors and directors, and even U.S. Presidents.

Music editor for Nashville.com. Jerry Holthouse is a content writer, songwriter and a graphic designer. He owns and runs Holthouse Creative, a full service creative agency. He is an avid outdoorsman and a lover of everything music. You can contact him at JerryHolthouse@Nashville.com
Previous Hall Of Famers Bill Anderson And Bobby Bare Selling Out
Next TONIGHT: Black Rebel Motorcycle Club At The Exit/In