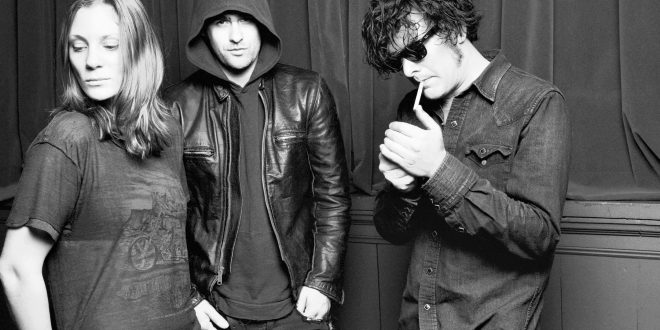 True rock and roll is hard to find these days but Black Rebel Motorcycle Club, Peter Hayes (guitar, vocals) Leah Shapiro (drums) and Robert Levon Been (bass), have been bringing it to us for nearly 20 years. They’ll be at the Exit/In tonight in support of Wrong Creatures, their eighth full-length studio album.  Wrong Creatures returns to the core of BRMC’s alchemy, while also plunging the knife in even further. From the Cave-esque murder balladry of “Haunt” to the garage punk of “Little Thing Gone Wild,” it runs the gamut allowing the band to flex every muscle in their armor. They remain opaque about the songs’ greater meanings, fearful of past misunderstandings. “I find myself writing about death a lot,” says Hayes. “I find myself having a discussion with death, which sounds dark. For me, it’s dark humor.” Talking about mortality allows Hayes to explore life’s great mistakes and regrets. Channeling them through rolling riffs and dirge-laden rhythms that stir the pot before reaching boiling point.

Music editor for Nashville.com. Jerry Holthouse is a content writer, songwriter and a graphic designer. He owns and runs Holthouse Creative, a full service creative agency. He is an avid outdoorsman and a lover of everything music. You can contact him at JerryHolthouse@Nashville.com
Previous Grand Ole Opry Announces Bonnaroo Performers
Next Max T. Barnes Honored As “International Artist of the Year”