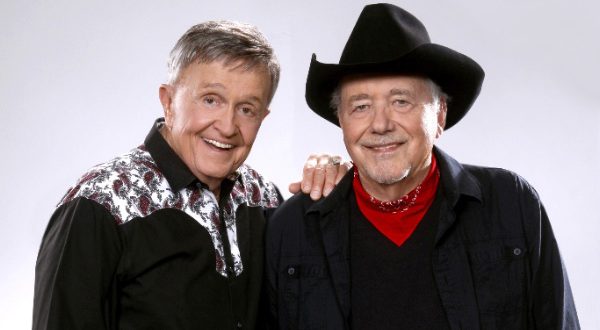 Hall Of Famers Bill Anderson And Bobby Bare Selling Out

It’s rare for two Country Music Hall of Fame and Grand Ole Opry members to share the stage outside of Nashville, but Bill Anderson and Bobby Bare are captivating audiences with every stop of their sold out ‘American Legends’ tour. With more than 100 Top 40 hits combined and never before heard stories from the road, Anderson and Bare are providing an intimate evening for fans with their co-headlining show. The iconic pair recently performed in Walker, Minn. and Johnson Creek, Wisc. Their next stop is in Hinton, Okla. with more dates to be added in the coming weeks.

“I’m really excited about teaming up and touring with Bobby. We’ve been friends since forever, and our stage shows seem to genuinely compliment one another. Besides, I love standing in the wings and listening to him recreate all those great hits of his. You don’t realize how many he’s had until they start coming at you back-to-back-to-back. This is going to be fun!” said Whisperin’ Bill Anderson.

“The opportunity to share this tour with one of my friends and Grand Ole Opry family members is an honor, and the chance to bring our stories and songs to the stage has brought back so many memories,” said Bobby Bare. “Bill Anderson has a way with words that captivates an audience and it is fun to watch.”

Recently Anderson released the video for his new single, “Until The Light Comes On Again.” The poignant, beautiful tune brings a message of hope to anyone who’s facing a challenge in their life. Anderson was inspired to write the song after someone close to him bravely faced a cancer diagnosis. Whisperin’ Bill Anderson is donating proceeds/royalties from the song to benefit the Sarah Cannon Fund at The Community Foundation of Middle Tennessee.

Bobby Bare was celebrated by Rolling Stone as one of the “50 Greatest Country Artists of All Time.” Bare released the raw and heart-tugging video in the summer of 2017 for his latest single, “I Drink,” which addresses the darkness of alcoholism. Commemorating his Diamond Anniversary and celebrating 60 years as an artist in the music industry, HbarC Western Wear has created the specialized “Bobby Bare Signature Series” custom shirt line. The anniversary also prompted the limited edition pressed vinyl album of Things Change which was released on record store day. On his 83rd birthday during his performance at the Grand Ole Opry, Garth Brooks surprised him with a “Welcome Home,” announcing his membership to the Opry family was re-activated.

Music editor for Nashville.com. Jerry Holthouse is a content writer, songwriter and a graphic designer. He owns and runs Holthouse Creative, a full service creative agency. He is an avid outdoorsman and a lover of everything music. You can contact him at JerryHolthouse@Nashville.com
Previous The Grand Ole Opry To Honor Military Families
Next Grand Ole Opry Announces Bonnaroo Performers