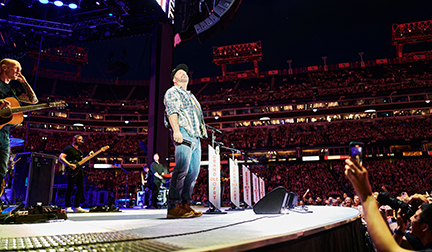 Garth Brooks celebrated his Grand Ole Opry membership on Saturday with an Opry celebration as the opening act for the second concert in a two-show run at Nissan Stadium in downtown Nashville. Opry members Lauren Alaina, Larry Gatlin, Jeannie Seely, Trisha Yearwood, Chris Young, and special guest Chase Rice as well as Brooks all performed, and WSM Radio personality Bill Cody served as announcer. Young opened the show with his hit “Gettin’ You Home” before stepping into a host role and welcoming Rice to the stage for two songs. Yearwood performed her smash debut single “She’s in Love with The Boy” and was joined by Alaina, who she officially inducted into the Opry in February. Young and Brooks collaborated on Brooks’ smash “Papa Loved Mama” before everyone gathered on stage to sing the Opry anthem “Will The Circle Be Unbroken.”

As the performers took the stage at Nissan Stadium, the Grand Ole Opry simultaneously took place at the Opry House and was heard around the world on WSM Radio and the internet with performances by Opry members John Conlee, Carrie Underwood, Sam Williams, and more.

Music editor for Nashville.com. Jerry Holthouse is a content writer, songwriter and a graphic designer. He owns and runs Holthouse Creative, a full service creative agency. He is an avid outdoorsman and a lover of everything music. You can contact him at JerryHolthouse@Nashville.com
Previous Dierks Bentley Scores His 21st Career Number One
Next Charles J. & The Conquistadors Team Up With The Bellamy Brothers