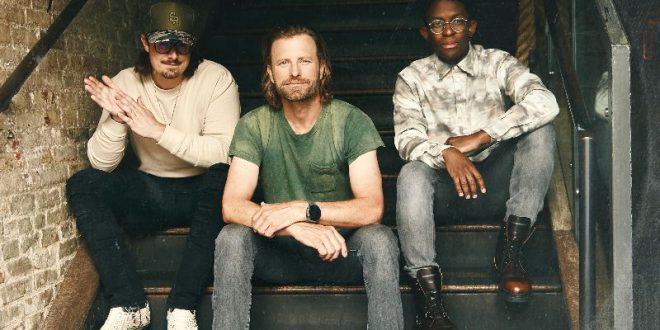 Dierks Bentley takes “Beers On Me” to the top of Mediabase/Country Aircheck Singles chart and Billboard’s Country Airplay chart this week, notching his 21st career No. One. Joining forces and voices with rising country stars BRELAND and HARDY, Bentley ahead of launching his BEERS ON ME TOUR with special guests Ashley McBryde and Travis Denning, kicking off June 3rd. It was recently announced that his SEVEN PEAKS MUSIC FESTIVAL will once again return this Labor Day Weekend, September 2-4, in a new scenic setting of San Luis Valley in Villa Grove, CO, as passes will go on sale to the general public this Friday (4/22 at 10:00A MT) at sevenpeaksfestival.com.

“From start to finish this song was a true collaboration, and to do it with BRELAND and HARDY really means a lot,” Bentley said. “They both bring something that’s so needed in Country music right now and can’t thank the fans and Country radio enough for embracing this one. I’m lucky to have gotten a chance to work with these two and it’s cool to be able to celebrate BRELAND’s first number one song – as an artist and songwriter – with him.”

Bentley celebrates his 16th year anniversary as a member of the Grand Ole Opry and will be inducted into the Music City Walk of Fame next month.

Music editor for Nashville.com. Jerry Holthouse is a content writer, songwriter and a graphic designer. He owns and runs Holthouse Creative, a full service creative agency. He is an avid outdoorsman and a lover of everything music. You can contact him at JerryHolthouse@Nashville.com
Previous LISTEN: Kolby Cooper’s “Breaking News”
Next Garth Brooks Creates Opry Celebration To Open Nissan Stadium Concert