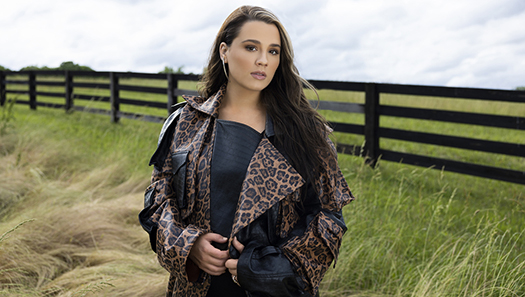 Gabby Barrett has the top streaming song total to date by a female artist currently on the Country radio charts, as her Top 5 “Pick Me Up” single is PLATINUM. Radio host Lon Helton recently surprised Barrett with the official RIAA certification news while she co-hosted Country Countdown USA for the first time. Listen here.

“That’s awesome. Thank you, thank you, thank you. I have the best fanbase in the world,” shared Barrett on-air. “Country music lovers are seriously just the most loyal fanbase I’ve ever seen in my life, so I’m very grateful to be a part of this format. I love this song, so I’m glad other people do too.”

As found on the extended version of her acclaimed PLATINUM debut album, GOLDMINE (DELUXE) (Warner Music Nashville), Barrett’s backroad ballad – penned by Barrett, Ross Copperman, and Jon Nite – has surpassed 225 MILLION global streams to date and is quickly approaching 5 MILLION views on the adjoining music video. With over 6.3 BILLION career airplay impressions and 2.5 BILLION global career streams to her credit, she continues to prove herself as an unstoppable force in the genre.

With new music promised this year, Barrett returns to the road to support select dates with Kane Brown this spring.

Music editor for Nashville.com. Jerry Holthouse is a content writer, songwriter and a graphic designer. He owns and runs Holthouse Creative, a full service creative agency. He is an avid outdoorsman and a lover of everything music. You can contact him at JerryHolthouse@Nashville.com
Previous The Kitchen Dwellers Coming To Nashville
Next Jenny Tolman & Dave Brainard Welcome Baby Boy