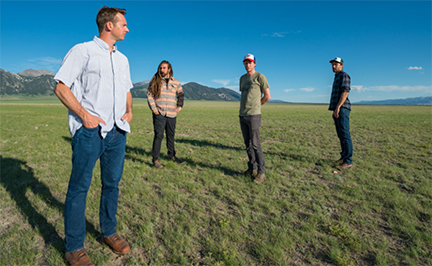 The Kitchen Dwellers Coming To Nashville

Today the Wise River Montana, Americana alt/bluegrass band, Kitchen Dwellers have announced their 17-date 2023 Spring Tour with support from Nashville’s Sicard Hollow. And if you saw them at Cavefest you know how good they are. The tour kicks off on April 12 and they’ll be making a stop in Nashville at the on April 22. The newly announced dates will take the band through the midwest, southeast, and northeast, before wrapping up in Milwaukee on May 6. Artist pre-sale begins today at noon local time followed by general on-sale this Friday at 10am local time.

The Dwellers started off 2023 with several sold-out shows in Colorado and Montana and will continue their tour tonight (January 17) for the first of two nights at Knotty Pine in Victor, ID.
The band will finish out January with multiple two-night shows in Whitefish, MT at The Great Northern Bar & Grill, and then in Bozeman at The ELM. Before touring throughout the West Coast in February.

“The town of Wise River is basically a forgotten spot on the map,” Shawn says. “It used to be a thriving place with many prosperous mines, but now it’s practically dried up. There’s a hell of a lot of melancholy. In our mind, it symbolizes the overall feeling of being in slowed-down Montana life.”

Music editor for Nashville.com. Jerry Holthouse is a content writer, songwriter and a graphic designer. He owns and runs Holthouse Creative, a full service creative agency. He is an avid outdoorsman and a lover of everything music. You can contact him at JerryHolthouse@Nashville.com
Previous Willie Nelson Releasing Album Of Harlan Howard Songs
Next Gabby Barrett Goes Platinum