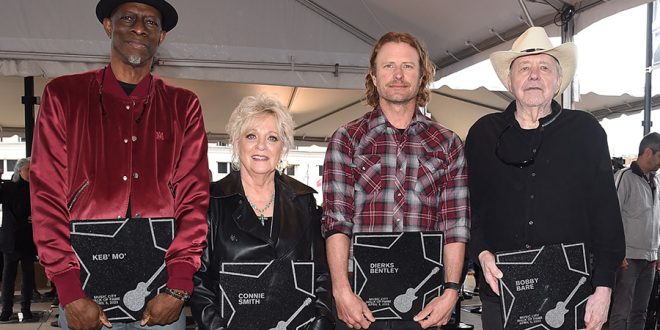 Four Inducted Into The Music City Walk of Fame

On Tuesday, April 5, staples of Nashville’s musical fabric Bobby Bare, Keb’ Mo’, Connie Smith and Dierks Bentley were inducted into the Music City Walk of Fame. Each artist was presented their own star in Walk of Fame park in SoBro between the Hilton and the Country Music Hall of Fame, where Bare has been a member since 2013 and Smith since 2012.

Bare’s career has spanned over seven decades, he received a GRAMMY in 1964 for “Detroit City” and earned nearly five dozen top 40 hits from 1962 to 1983. He has long been considered one of the most instrumental connectors in Country music having laid the foundation for contemporaries like Waylon Jennings and Billy Joe Shaver and influencing the styles of Garth Brooks, Blake Shelton and countless others who’ve followed in his footsteps.

The Walk of Fame’s goal is to recognize artists for their outstanding contributions to the musical history of Nashville. The artists inducted this year received the 90th, 91st, 92nd and 93rd stars on the Walk of Fame during the first ceremony in more than two years due to the pandemic.

This induction class joined fellow iconic musicians like Elvis Presley, Dolly Parton, Jimi Hendrix and Garth Brooks. The Music City Walk of Fame originated in 2006 on Nashville’s Music Mile where the permanent sidewalk medallions with the names of inductees are displayed in a star design.

Music editor for Nashville.com. Jerry Holthouse is a content writer, songwriter and a graphic designer. He owns and runs Holthouse Creative, a full service creative agency. He is an avid outdoorsman and a lover of everything music. You can contact him at JerryHolthouse@Nashville.com
Previous Garth Brooks To Open 40,000+ Square Foot Venue On Broadway
Next WATCH: The Isaacs’s “Humpty Dumpty Heart”