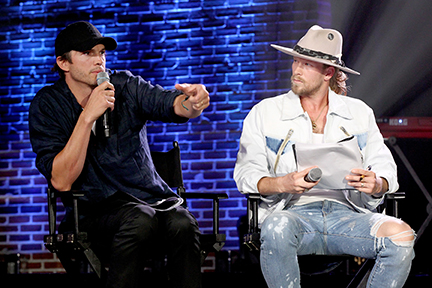 Last night, WeWork along with Ashton Kutcher, Dia Simms, and Florida Georgia Line celebrated inspiring startups and innovators, awarding $888k in funding during the Nashville Creator Awards.
Finalists across categories such as performing arts, nonprofit, and business venture competed for the top spot, with the grand prize of $360k going to eco-fashion startup Queen of Raw.
Ashton Kutcher channeled his inner Simon Cowell, firing away tough questions around everything from blockchain to profit margins, running numbers and industry standard prices against the finalists’ live pitches in real time.

Selected from a pool of more than 1,700 applicants from across the Eastern United States, Puerto Rico and Ontario, finalists pitched their ideas, business models and organizations before a live audience and judges including: Ashton Kutcher, Dia Simms, President of Sean Combs Enterprises, and multi-platinum superstar duo Florida Georgia Line. Nine winners were awarded from $18,000 to $360,000 in funding from projects ranging from smart, data-collecting fabric to medical interpreter certificate training, to interactive music programs for seniors.

“These creator awards are not just sweeping the nation, these Creator Awards are sweeping the world,” said host and judge Ashton Kutcher, who also shared his experience meeting WeWork founder Adam Neumann in 2002. The two had met through Neumann’s then girlfriend and now wife, Mila Kunis, and immediately recognized their shared ambition and work ethic.

The grand prize of $360,000 went to Queen of Raw, a two-sided marketplace bringing raw fabric back to life by giving the factories that overproduce it and the retailers that over-purchase it, a place to recapture its value.

“It was an honor and a privilege to even make it this far. The kinds of questions they asked were so valuable, informative, and supportive,” said Stephanie Benedetto, Founder and CEO of Queen of Raw. “This is a lot of money. We were a bootstrapped company and it took us all the way to launch. We want to be able to grow and scale beyond the U.S. and around the world.”

The event was open to the public and co-hosted by VP & Senior Editor of Forbes Media, Steve Bertoni, and WeWork Co-Founder & CEO, Adam Neumann, as well as his sister, former supermodel, Adi Neumann. The night also included a live performance by multi-platinum selling rapper and producer, G-Eazy.

“I was super surprised and I was blown away. I’m still completely speechless,” said Community Giver Award recipient Branden Harvey hours after the win. “We celebrate the people ideas and movements that make a difference in the world. This much money will help us scale. We want our Goodnewspaper in coffee shops, classrooms and hospitals; places people need good news.”

Adam Neumann surprised guests after inviting two audience members (non-finalists) on stage for a chance to pitch their businesses and win prize money. Sarah Martin McConnell, Director at Music For Seniors , took home $50,000 after impressing judges with her growth plans.

The event celebrated entrepreneurship, innovation, and creativity, with attendees shopping local member and non-member products at the pop-up market and making connections at the job fair in partnership with Jobbio. Since March 2017, WeWork has hosted more than 28,000 attendees and given away millions of dollars across 13 Creator Awards Regional Semi-Final events around the globe, plus one Global Finals event in New York City in January 2018. According to previous winners, these awards can be a game changer for companies and organizations looking to reach the next level.

Music editor for Nashville.com. Jerry Holthouse is a content writer, songwriter and a graphic designer. He owns and runs Holthouse Creative, a full service creative agency. He is an avid outdoorsman and a lover of everything music. You can contact him at JerryHolthouse@Nashville.com
Previous Al Green Releases First Song in 10 Years
Next The Weight Band Appearing At 3rd & Lindsley September 27th