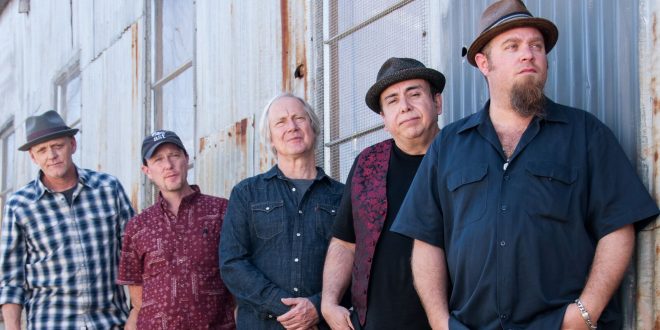 After years of touring, The Weight Band has released a new album, World Gone Mad. Composed of members of legendary roots rock act The Band and members of the Levon Helm Band. The band will appear at 3rd & Lindsley on Thursday, September 27th. The show will feature original songs off the new record as well as hits from The Band’s catalog.

The Weight Band originated in 2013 inside the famed Woodstock, New York barn of Levon Helm when Jim Weider and Randy Ciarlante — both former members of The Band — performed “Songs of The Band” with Band founder, Garth Hudson, alongside Jimmy Vivino and Byron Isaacs. Inspired to carry on the legacy of the unforgettable rock group, Weider, Ciarlante and Isaacs began performing fan favorites from The Band catalog to audiences across the country, inviting Brian Mitchell and Marty Grebb to complete their sound. The Weight Band later added Albert Rogers, Michael Bram and Matt Zeiner to cement their current lineup. With a heavy US tour schedule slated for 2018 and beyond, the concerts blend The Weight Band originals with songs from The Band’s treasured catalog including “Up On Cripple Creek”, “The Weight” and “Dixie”- complimenting The Band’s timeless legacy while pushing forward with new original material inspired by their Northern New York home base.

Jim Weider (guitar, mandolin & vocals) is a former member of The Band. From 1985 to 2000, Jim replaced Robbie Robertson as their lead guitarist, writing songs and performing on their three studio albums, Jericho, High on the Hog and Jubilation. He toured internationally with original Band members Levon Helm, Garth Hudson and Rick Danko for fifteen years and was featured with them on numerous albums, films, videos and in television appearances.

Michael Bram (drums & vocals) is soulful singer and multi-instrumentalist. Michael splits his time drumming for The Weight Band and Jason Mraz. He has been a staple in the New York music scene for almost two decades- other career highlights include working with Willie Nelson and recording tracks with Bob Margolin of The Last Waltz fame.

Brian Mitchell (keyboards & vocals) is a current member of Levon Helm’s Midnight Ramble Band and is well-known within the circles of the music industry and beyond for his solo career and his high-profile collaborations. He has recorded and performed with some of music’s most respected artists, Levon Helm, Bob Dylan, Al Green, B.B. King, and countless others.

Albert Rogers (bass, vocals) has shared the stage with Levon Helm and Garth Hudson in The Jim Weider Band, and has also performed with Sid McGinnis, Hubert Sumlin, Jimmy Vivino, Albert Lee and many others.

Music editor for Nashville.com. Jerry Holthouse is a content writer, songwriter and a graphic designer. He owns and runs Holthouse Creative, a full service creative agency. He is an avid outdoorsman and a lover of everything music. You can contact him at JerryHolthouse@Nashville.com
Previous Florida Georgia Line, Ashton Kutcher Help Award $888k at Nashville Creator Awards
Next Dylan Scott Announces “Nothing To Do Town” Tour