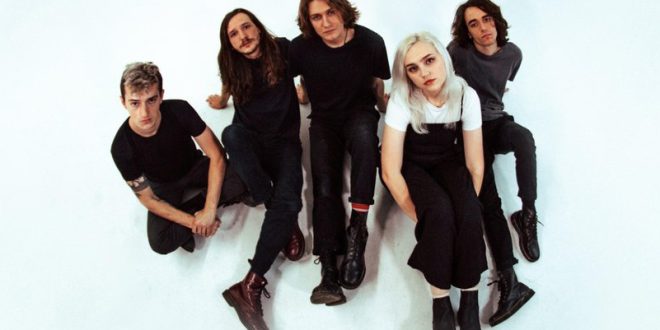 Indie Band flipturn is coming to the Basement East on Dec 1. They have a cinematic sound rooted not only in the Florida towns where the musicians first banded together as teenagers, but also in the anthemic live show that’s taken flipturn from coast to coast. In the time since their formation, flipturn has mushroomed to reaches far beyond the walls of the Fernandina Beach garage they first practiced in. Years before they recorded Shadowglow with producer Jon Gilbert (Mt. Joy, Adam Melchor), flipturn came together in Florida. Frontman Dillon Basse, bassist Madeline Jarman, and lead guitarist Tristan Duncan held their earliest rehearsals in Madeline’s garage, meeting up after class to write the coming-of-age anthems that quickly made flipturn a must-see live band across the state of Florida. They were inspired by the gritty stomp of 2010s indie rock and the grand sweep of classic film scores, and they poured both influences into their own sound. Over the years that followed, the band released a handful of independent EPs, watched singles like “August” and “Chicago” become passionately adored standards both online and at shows, and expanded their lineup to include guitarist/synth player Mitch Fountain and drummer Devon VonBalson.

With over 50 million streams on Spotify alone, many sold-out headline shows across the US, and tours with Mt. Joy, Rainbow Kitten Surprise and Wilderado, the band has more than proven their place in the indie scene. This year has seen flipturn join the prestigious lineups of Bonnaroo, Lollapalooza, Shaky Knees, Hangout, SunFest, and Levitate. flipturn recently signed with Dualtone Records to further amplify the release of their debut project, joining their legendary roster of the likes of The Lumineers, Chuck Berry and Shakey Graves.

Music editor for Nashville.com. Jerry Holthouse is a content writer, songwriter and a graphic designer. He owns and runs Holthouse Creative, a full service creative agency. He is an avid outdoorsman and a lover of everything music. You can contact him at JerryHolthouse@Nashville.com
Previous Lainey Wilson Debuts New Song On Yellowstone
Next Thomas Rhett Marks His 20th Number One Song