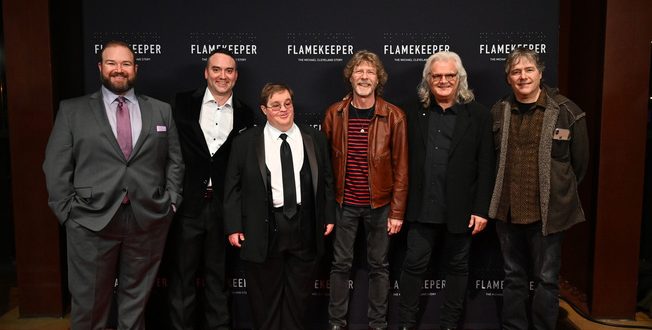 Last night, the stirring biographical documentary, Flamekeeper: The Michael Cleveland Story, premiered at the Country Music Hall of Fame and Museum. The film tells the story of Michael Cleveland, an iconic and sought-after fiddle player who has overcome great personal hardship to become one of Bluegrass music’s most revered instrumentalists.

Cleveland is the International Bluegrass Music Association’s 11-time, most-awarded, Fiddle Player of the Year, and he has won Instrumental Recorded Performance of the Year six times. Cleveland also fronts the 5-time Instrumental Group of the Year, Michael Cleveland & Flamekeeper, which he founded in 2006.

Cleveland was born blind and with a cleft palate, and in early childhood lost 80% of the hearing in his left ear. In spite of physical challenges, he undertook a musical career undeterred and has ascended to the highest possible echelons of his genre.

Director John Presley brings his expert eye and heart for storytelling to the project. The film, while visually engaging, was also designed with Cleveland himself in mind. “I learned that our visually impaired friends see the world in an entirely different way,” says Presley. “One of my goals was to create a film that Michael would be able to experience and enjoy through sound alone.”

Years of commercial and short film work, along with his experience as a musician, led the director on a journey to uncover how Cleveland became the artist—and person—he is today. “I have felt deeply honored to tell his inspirational story and present his talent to new audiences around the world,” says Presley.

“When I was first approached about the idea of a documentary film about me, I was definitely surprised, and it still seems so surreal,” adds Cleveland.  “For as long as I’ve been playing music professionally, I have made it a point to keep the focus on the music and not the fact that I am visually impaired.  I decided that if I was going to have a career in music, I wanted to make it on my abilities as a musician and not the fact that I was blind. After I talked to John and took a few days to think it over and run it by my family and the rest of the Flamekeeper team, I realized that this could be an inspiration to some young kid somewhere with a dream that looks as impossible as it seemed to me when I was growing up and dreaming of a career in music.”

The evening was hosted by the Country Music Hall of Fame and Museum’s Peter Cooper and was attended by a who’s who of bluegrass icons including Fleck, Bush, Gill, Ricky Skaggs, The Whites, Jeff White, Becky Buller,and others.

Flamekeeper was produced by  Validate Films and is Presley’s first feature-length documentary film. Presley was joined on the project by co-producer  Cortlandt Ingram, a familiar name in the bluegrass world. After winning over one hundred fiddle contests early in his career, Ingram founded a company providing audio and lighting resources for events across the nation. Ingram’s knowledge of the bluegrass genre was an invaluable asset to the film’s production.

Flamekeeper will be released globally to audiences online through Amazon and other streaming platforms on March 1. For more information visit  FlamekeeperFilm.com.

Music editor for Nashville.com. Jerry Holthouse is a content writer, songwriter and a graphic designer. He owns and runs Holthouse Creative, a full service creative agency. He is an avid outdoorsman and a lover of everything music. You can contact him at JerryHolthouse@Nashville.com
Previous Paul Bogart Signed With Kinkead Entertainment
Next Cream Tribute Coming To City Winery