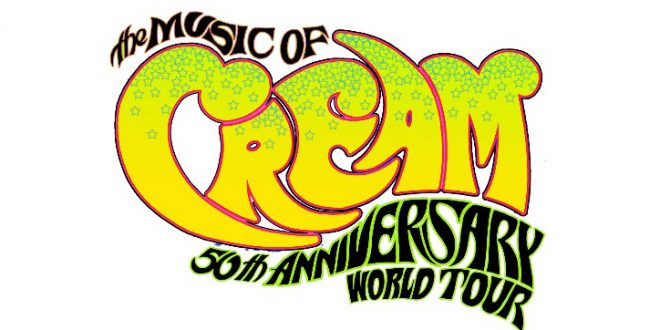 The pedigree of hallowed ’60s trio Cream – Ginger Baker’s son Kofi Baker, Jack Bruce’s son Malcolm Bruce and Eric Clapton’s nephew Will Johns – return to the United States this spring for a new leg of The Music of Cream – 50th Anniversary World Tour. The outing celebrates the extraordinary music and legacy their family members created on the heels of the 50th anniversary since the original lineup’s farewell U.S. tour of 1968.  Watch the trailer above. Catch the show April 7th at the Nashville City Winery.
Kicking off March 22nd in Newton, NJ, the 23-date spring tour will travel throughout the east coast and south stopping in such places as New York City (March 20th at Sony Hall), Lancaster, Rochester, Columbus, Nashville, Fort Lauderdale, Sarasota, New Orleans, Houston and Dallas before wrapping April 20th in San Antonio.
First launched in 2017 to rave reviews in Australia and New Zealand, The Music of Cream performed over 40 shows in 2018 across North America and the United Kingdom. Throughout the extensive multi-media show, Kofi Baker (drums), Malcolm Bruce (bass, vocals) and Will Johns (guitar, vocals) perform songs such as “Sunshine of Your Love,” “Crossroads,” “Spoonful” and “White Room” and tell personal stories, while footage of their fathers and mentors is shown on the big screen.
Now, Baker says, “I feel more positive that we played the music the way Cream did; we were able to stretch out and improvise and the audience was right there with us. I really enjoyed playing with Will and Malcolm as we share a bond over this music that our fathers created. And m eeting the fans after the shows and hearing their thoughts really validated and inspired me to keep playing this music.”
Bruce adds, ” The uniqueness of the approach to Cream’s music means that I learn and grow every night we play. There is always something new to be discovered in the music: tempo, feel, groove, notes, dynamics, inflection. It is truly wonderful to be able to improvise onstage.”
“The audiences seemed to appreciate, and enjoy, that we were not just copying and actually putting our own slant on things,” notes Johns.
During its heartbreakingly short lifespan, Cream was an explosive musical cocktail that provided the super-group blueprint for others to follow. The group’s third album, Wheels of Fire (1968), was the world’s first platinum-selling double album, and collectively they sold more than 15 million copies of their albums worldwide. Not surprisingly, Rolling Stone ranked the Rock and Roll Hall of Fame group (inducted in 1993) as 67th in their ‘100 Greatest Artists of All Time’ list.
Apart from an equally brief reunion in 2005 of seven shows at London’s Royal Albert Hall and New York’s Madison Square Garden, Cream retained an almost mythological status in the music world, right up until the passing of Jack Bruce in 2014. This, for many fans, marked the end of an era and an acceptance that there would never really be another opportunity to celebrate the group’s legacy. That is, until The Music of Cream – 50th Anniversary World Tour emerged.

Music editor for Nashville.com. Jerry Holthouse is a content writer, songwriter and a graphic designer. He owns and runs Holthouse Creative, a full service creative agency. He is an avid outdoorsman and a lover of everything music. You can contact him at JerryHolthouse@Nashville.com
Previous Flamekeeper: The Michael Cleveland Story Premieres At HOF
Next Will Muse Raises $35,247 For Make-A-Wish