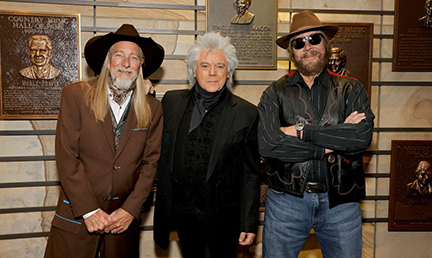 Dillon, Stuart and Williams Jr., who received country music’s highest honor, were treated to heartfelt tributes and inspired performances of songs they wrote or made famous. These tributes, performed by artists who are always a surprise to both the audience and the inductees, are an annual highlight of the museum’s Medallion Ceremony. The following is a list of the artists who paid tribute to each inductee, as well the Hall of Fame members who were personally selected by each inductee to present them with their medallions.

The ceremony concluded with a performance of “Will the Circle Be Unbroken” by Country Music Hall of Fame member Connie Smith.

Music editor for Nashville.com. Jerry Holthouse is a content writer, songwriter and a graphic designer. He owns and runs Holthouse Creative, a full service creative agency. He is an avid outdoorsman and a lover of everything music. You can contact him at JerryHolthouse@Nashville.com
Previous WATCH: Erin Kinsey’s “Drive”
Next Kentucky Headhunters To Make Opry Debut Dec. 4